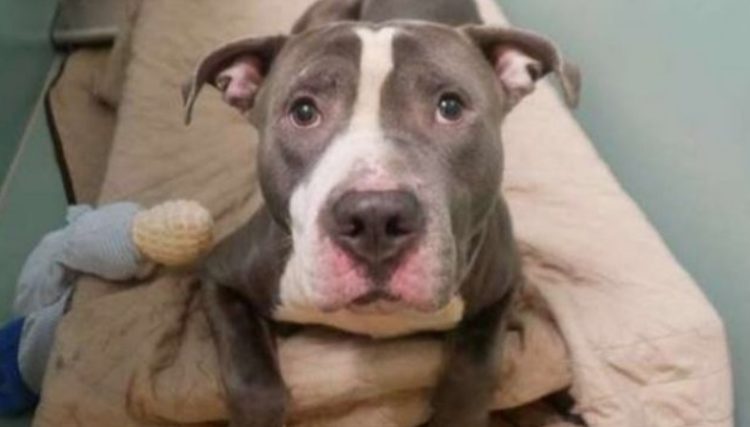 Until doing research for this article I was unaware that there was such a thing as a high kill animal shelter. Then I came across this web site which gave me a better perspective of what is currently going on in the animal shelter world.  I thought it was odd that the famous PETA organization had an unexpected opposing view though it does hold some merit.  When I read the story it really was amazing how this one pit bull managed to be rescued and avoid euthanization. Though the story emphasizes the fact that this particular animal shelter was a “high kill” shelter the reality is that most animal shelters in the country are. This is just one example of what goes on across the country every day. Bringing it to our attention has immense value.

The basic story is that the family that had owned this pit bull was ready to add one more to the family – except this was a human baby. Sometimes hard choices have to be made, and for this family it was decided that it would create an unnecessary financial burden to keep all three of their dogs. Though the story doesn’t mention the breeds of the other two dogs, it is not a stretch to believe that the reason the pit bull was shown the door was because it was a pit bull. After all, how much does it take on a per month basis to take care of a dog?

Nevertheless, the family took their pit bull and did the right thing. They took their dog to an animal shelter where it had a chance to be adopted into a caring home who could afford to take care of it. Animal shelters usually charge for accepting animals into their care. In the example at the beginning of this article the charge was $90. The pit bull apparently wasn’t a danger to anyone as the shelter gladly accepted him. It gave him a chance instead of the alternative of just setting him free to make it on his own without a home to go to.

October 11, 2018 was the day the pit bull was to be euthanized. The time was 5 p.m. Enter Julie Carner, who had posted a picture of the dog and his plight on her Facebook page for many weeks. She found a connection with Eleventh Hour Rescue volunteer Alana Guerrini who recalls, “I looked at that face and it absolutely crushed me.”  She lived near to the animal shelter and arrived at the shelter only minutes before the pit bull was to be euthanized.

But Guerrini was only a stopping point for the pit bull’s journey. She had kept the dog and took care of him while searching for the right home and family that would adopt him. Several weeks went by, and the pit bull, now named Stormy, was firmly set in a caring home. So this story has a happy ending, but there are thousands of unhappy endings every day. Well-meaning people either are not able to financially care for their dogs and bring them to a shelter, or have been deemed not to be able to properly take care of a dog. Either way, the chances of finding a “no-kill” animal shelter are pretty slim. As soon as they are accepted by the shelter the clock starts ticking. For people who work or volunteer in an animal shelter, witnessing this process day after day must be heartbreaking.

Bringing an animal to an animal shelter thinking it will eventually find a new home is simply not realistic. But that is what most people believe because their involvement is limited to bringing a pet to the shelter, paying the required fee, and feeling bad on the way home. If people knew the extent of the problem they might find better ways to deal with the problem. It can be asked how many people are actually aware of the extent of the problem. The PETA article is an illustration of the impossibility of using animal shelters as a solution to the growing pet population.

But between now and the time a viable solution is found, people can get involved and be part of the solution without leaving their home. Paying $90 to a shelter to accept an animal sets a timer that determines their fateful day. Animals need to be cared for, and that costs money. Between food, the living space, heat, light, and other unseen expenses, the shelter can only afford to take care of animals for a limited period of time. So even if you keep the animals you have, financially supporting your local animal shelter makes it better for everyone.

New donations would allow animal shelters to expend their physical facilities, accept more animals, and care for them longer, buying more time to find a suitable family to be adopted into. There are plenty of people who are willing to donate a few hours of their time as volunteers and fill the demand for more help when the facilities expand. There are few jobs, paid or volunteer, that offer a great work environment. The alternative is to limit your involvement which will likely result in animal shelters raising their acceptance fee. That would likely result in fewer animals being put up for adoption, creating yet another problem.

It’s not until we understand the dimensions of the problem that we can get a sense of what every animal shelter has to deal with, every day. A separate article can be done on what happens to animals in shelters that require daily medication or that have special needs. Indifference is not an answer. Hearing “have your pet spayed or neutered” as often as it has resulted in many people simply tuning out the message. The problem is local and national, and any solution must address both sides of the story.