Home
Dog Health
What is Puppy Pyoderma and How is it Treated?
Prev Article Next Article 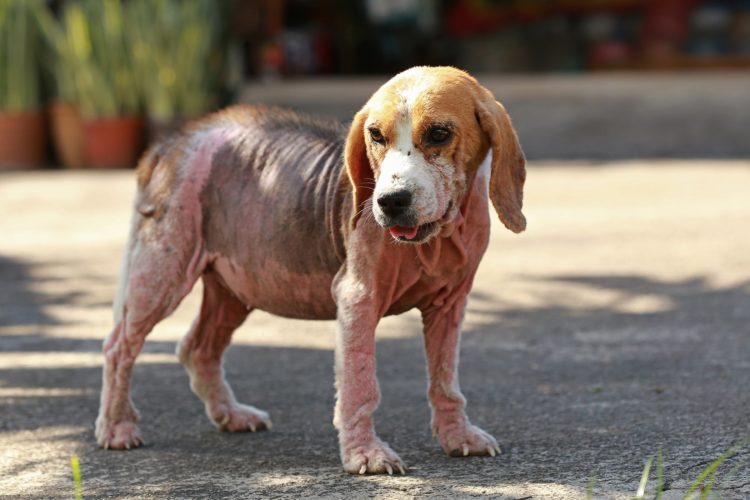 Pyoderma is a term cobbled together using a couple of Greek elements. One would be pyo, which means “pus,” whereas the other would be derma, which means “skin.” As a result, it should come as no surprise to learn that puppy pyoderma is a particular kind of skin infection that can be found in puppies. To be exact, it is a skin infection caused by the bacteria found upon the skin of puppies, which tends to be more vulnerable than that of their mature counterparts.

With that said, there are a number of potential symptoms of puppy pyoderma. For example, puppy pyoderma often comes with red pustules with white centers filled with pus, which explains their name. However, other common symptoms range from scabs and scaly skin to hair loss, which can cause some rather odd appearances because of how that affects the coat of the puppy. Unfortunately, distinguishing between puppy pyoderma and other skin infections can be rather challenging to say the least, which is why that is something best left to the experts, who can use a skin cytology as well as other useful procedures to rule out potential causes for the symptoms that can be seen.

How Is Puppy Pyoderma Treated?

In some cases, puppy pyoderma is mild enough that puppy owners can expect it to go away on its own within a short period of time, particularly if the puppy is old enough that they are on the cusp of becoming an adult. However, puppy pyoderma causes itching as well as other unpleasant problems, meaning that it tends to be best to seek out help sooner rather than later.

Generally speaking, puppy pyoderma is treated using antibiotics, which makes sense considering the bacterial nature of the cause. Sometimes, this treatment consists of a topical antibiotic. Other times, this treatment might consist of either oral antibiotics or injected antibiotics, which tend to see use in more serious cases. With that said, there are cases when a puppy might experience outbreak after outbreak of puppy pyoderma in spite of the use of antibiotics. When that happens, a veterinarian can conduct further testing to figure out whether the right antibiotic is being used for the problem or not, which can sometimes be an issue.

Besides this, it should be mentioned that prevention can play an important role in curbing puppy pyoderma as well. For example, making sure that a puppy has padded bedding that is kept in a clean, dry condition can do wonders for its well-being, while more potential solutions can be found by consulting with a veterinarian who has a better grasp of the exact nature of the problem.

What Should You Do about Puppy Pyoderma?

When a puppy owner notices signs of puppy pyoderma on their puppy, they should consult a veterinarian sooner rather than later. Yes, puppy pyoderma isn’t a huge problem most of the time, but it is nonetheless unpleasant for the puppy as well as the puppy owner. Furthermore, it should be mentioned that the symptoms of puppy pyoderma can show up for other medical conditions as well, which include some that are much more serious in nature. Due to this, it is a good idea to make sure that what the puppy has is actually puppy pyoderma rather than some other medical condition that can worsen if it is permitted to run unchecked. Simply put, consulting a veterinarian tends to be the smarter and more sensible option because it is much better to be safe than sorry when it comes to a puppy’s health, particularly since they are not as robust as they will be once they have become full-grown adults.