Anyone who has ever had a puppy will know how tricky it is to keep an eye on them all the time. Playful pups think it is great to play a game of hide and seek with their owners, hiding out of the way where nobody can see them. Similarly, they can easily become escape artists as their small heads slip free from their leash or they escape through a door that is only slightly ajar. In many cases, this can mean a puppy goes missing. However, with the help of neighbors and social media, the puppy and its owner are usually reunited quickly. Sadly, that is not always the case. I Heart Dogs reported a story about a woman called Monica Mathis who lost her puppy. Three years ago, Mathis got a puppy called Hazel. She was delighted to have the cute little pup in her home and was enjoying spending time with her.

One thing Mathis had noticed about Hazel was that she was a bit of an escape artist, which meant she had to keep a close eye on the dog. One day, Mathis took Hazel into the back yard on her leash so that the dog could go to the toilet. While outside, Mathis realized that she needed the toilet herself. She left her dog on the leash in the yard while she nipped back inside. When Mathis returned to the yard, Hazel had vanished. Mathis began a frantic search of the local area, but her efforts were to no avail. She began to accept that she had little hope of ever finding her furry friend. At that time, Hazel and her children had been living in Iowa. After Hazel went missing, the family moved to Minnesota. By that point, Mathis had accepted that Hazel was gone from their lives forever and that it was time to move on without her.

All that changed one day when Mathis saw a promotion run by a Florida brewery. Motorworks Brewery were running a campaign that featured the faces of adoptable dogs on special beer cans. They were doing this to support local shelters in finding new homes for the dogs. It was on one of these beer cans that Mathis saw a very familiar face staring back at her. Although the information on the can said that the dog featured in the photograph was called DayDay, Mathis knew that it was Hazel. Mathis couldn’t believe her eyes when she saw Hazel on the beer can. What was even more surprising to her was that Hazel was now in Florida in the care of Manatee County Animal Services. Mathis contacted the shelter straight away to tell them that Hazel was her dog. 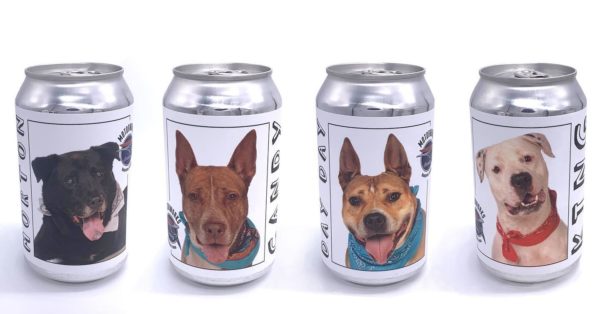 Unfortunately, the shelter could not simply hand over the dog to Mathis. First, she had to prove that the dog was rightfully hers. She sent multiple photographs of Hazel to the shelter in the hope that it would prove that Hazel belonged to her. Thankfully, the shelter eventually accepted that Hazel truly was Mathis’ dog based on photographic evidence. Staff from the shelter explained to Mathis that Hazel had first arrived at the shelter a few months previously as a stray. The first thing they did was to check if Hazel was fitted with a microchip. Although there was a microchip present, the information on the database relating to Hazel gave Mathis’ former address. The information had not been updated with Mathis’ new details and address. Therefore, the staff had been unable to contact Mathis and they put Hazel up for adoption.

The shelter had become involved in the promotion with the local brewery and selected the dogs that had been with them the longest to take part in the campaign. The photographs of the dogs that were used had been chosen randomly, and it was purely by chance that Hazel had appeared on the beer cans at the time that Mathis noticed the campaign. Everyone at the shelter was delighted that Hazel was set to be reunited with her owner, although it remains unclear how she got from Iowa to Florida in the first place. It is likely that this is something that will remain a mystery with only Hazel knowing what happened after she vanished. Due to the distance between the shelter in Florida and Mathis’ home in Minnesota, there have been some difficulties in reuniting the pair. Fortunately, help is at hand in the form of an organization called the Friends of Manatee County Animal Services. This organization raises money to support the care of the shelter animals and the adoption process, and they have agreed to cover the cost of getting Hazel safely back home to Mathis.

Mathis has said that the whole experience has left her feeling like an emotional wreck. There was the heartbreak of losing Hazel, the joy of finding her again, the stress of not being able to get her home, and then the gratitude that there are people willing to help to make sure they are finally reunited. It has been a roller coaster of emotions, although the story has a happy ending. This story highlights the importance of making sure that your dog has a microchip. Without the data held by a microchip, it is very hard for shelters to reunite dogs with their owners, and this leads to them being adopted to a new home. Equally, the story highlights the importance of making sure the details on the microchip are updated if there are any changes, such as moving to a new address. If Mathis had updated her new address to the microchip, then it is possible that she would have been reunited with Hazel much sooner. Despite not doing this, Mathis was very fortunate to get Hazel back. The fact that this was down to a brewery’s promotion was down to an unexpected turn of fate that had a positive outcome.