The uniqueness of a blue Great Dane is one of the most exciting aspects of the dog. Its gorgeous steely blue coat is something that no other dog can boast, and it makes it exceptionally special. It’s an eye-catcher, and it’s a dog that you’re going to fall in love with at first sight. What’s even more special about this breed is the fact that they come in several different shades of blue. The steely blue is one of the most desired shades, but this breed also comes in shades of charcoal and even slate. The only way to ensure that a Great Dane puppy is blue is to breed two adults.

The only way a dog will be born blue is if both parents have this recessive blue gene. Otherwise, it’s going to be born your standard Great Dane puppy – not to say there is anything wrong with your average Great Dane. The blue Great Dane is one of the most beautiful dogs in the world. Tall, strong, agile and beautiful; it’s a dog that will turn heads and cause people to look twice. It’s an intimidating dog thanks to its size, but it’s a kind one. It’s this dog that is going to come into your life and love you for the duration of his. He’s lovable, sweet and very friendly, but he does not realize that he’s not a lap dog; so get ready for some surprising moments.

What’s fun about this breed is the fact that this is not a dog that’s content to simply stand beside you. This is a dog that’s going to make it his goal to lean right into you. He’s going to knock you over, knock you off balance and make you crazy on a regular basis. He knows he’s large, but it’s never going to fail to surprise him when he leans into you to make contact and show affection and he knocks you over. He will give you a look that says, “What just happened you silly clumsy human?” and act as if he had nothing to do with the fact that you just fell over. This is the kind of dog that’s going to always find himself completely innocent, and he’s never going to stop. He’s very affectionate and loving, and he just can’t help but want to be close to his people at all times.

Believe it or not, they hav the ability to be one of the most aggressive dogs in the world. They’re not aggressive for the fun of it, however. They’re aggressive when they need to be. For example, a blue Great Dane is going to detect danger and do what it needs to do to protect its home and family. It is not the kind of dog that will stand idly by as danger creeps up on its loved ones or home. It will bark, it will growl and it will attack – thought the blue Great Dane will wait until it is ordered to attack or until danger is too close for comfort. Its protective instinct turns this dog from a lovable companion to a ferocious beast in a second because it’s so protective. It’s important that you understand that these dogs are not mean dogs. They simply understand when danger is near and they become ferocious. They will not attack your children or your friends or arbitrarily attack the mailman. When they are threatened or you are threatened, however, they will not hesitate to go from kind and sweet to absolutely terrifying. The other good news about these dogs is that they are so large, most people won’t even take the time to go near them.

It Has a Sixth Sense

They say that many dogs develop a sixth sense, and the blue Great Dane is one of them. These dogs have a sixth sense for danger and they are very good at detecting it. They seem to be able to recognize a stranger as someone who is kind or someone who is not. Even without any other reason to believe that someone is dangerous, this breed is going to know when someone is not the kind of person that should be around your family or your children. For example, they will bark when anyone comes to the door or down the driveway, but he will begin to growl dangerously when he recognizes the person as someone without good intentions. Otherwise, he will simply bark to alert his family that there is someone approaching.

These are dogs that are born relatively small and adorable, but they grow really fast. In fact, they grow a lot faster than most other dog breeds. For this reason, owners should be very careful not to feed them too little or too much, and they must exercise these dogs on a regular basis. The blue Great Dane is the kind of dog that requires five to six small meals each day and frequent exercise. They will become very tall very fast, in just a matter of weeks. Feeding them larger meals throughout the day is going to encourage these dogs to become overweight and lethargic. Additionally, they need at least one long walk each day as well as plenty of time outside. Being kept inside is not good for these large dogs.

Indoor Living is Bad for them 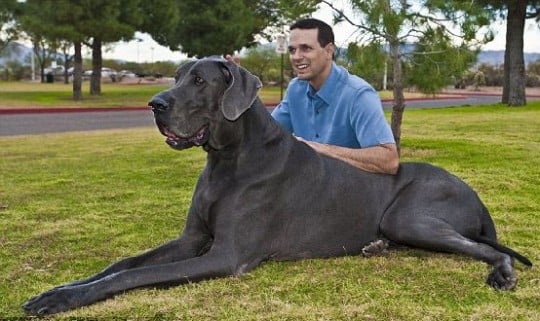 They Only Train Well as Puppies

The one thing that all blue Great Dane owners should know about their new dog is that there is only one really good time to train a blue Great Dane, and that’s when the dog is a puppy. There is not time to wait to train a dog of this manner. They are eager to learn and happy to please, but they are not going to change their ways as they get older. It’s imperative that blue Great Dane owners take the time to ensure their dogs are well-trained as puppies. Otherwise, the window of opportunity closes and it becomes difficult to train an adult. It’s not impossible, but it’s very difficult and oftentimes not even a possibility. Blue Great Danes are very easily trained as puppies. They are very intelligent dogs with very keen minds, and they’re not going to be difficult to train. The only catch is that you simply have to train them early. Waiting can make it very difficult to train them later on. They’re very stubborn animals that will get used to the way things are as puppies and resist change as they grow older.

They Need their Teeth Brushed Daily

Blue Great Danes are dogs that need frequent dental care. What does this mean? This means you are going to have to get up close and personal with your blue Great Dane every single day at least once. They are very prone to dental infections and other oral health issues, including bad breath and infection. This means you need to invest in a doggie toothbrush and some mouth cleaner safe for your dog – your vet will be able to recommended something for you – and brush your dog’s teeth every single day. It’s best if you take the time to brush his teeth in the evening once he’s finished eating for the day. Not taking adequate care of your blue Great Dane’s teeth on a daily basis can cause several unfortunate health problems. Gum disease, decay and cavities and exceptionally bad breath are just a few of the issues you might have with your dogs if you don’t take care of your dog’s teeth every day. If you believe that your dog already suffers from any of these issues, you’ll need to contact your dog’s vet immediately to make an appointment. Your vet can help you diagnose any health issues in the mouth and help correct them as quickly as possible.

They Have Some Health Issues

The Blue Great Dane is not an unhealthy dog. Of course, any dog can actually be an unhealthy dog if it’s not well taken care of. Additionally, it’s virtually impossible to know if a dog is going to grow up and develop a health issue. However, the blue Great Dane is a bit more prone to certain health issues than other dogs. Hypothyroidism, Von Willebrand’s disease, tumors and bloat are just a few of the health issues that a blue Great Dane might be more prone to experience. This does not, under any circumstance, mean that your dog will definitely suffer from any of these health issues. However, it does mean you should regularly keep your dog’s appointments with the vet and ensure that he or she remains healthy by feeding them correctly, exercising them regularly and having anything questionable checked out right away.

This might be one of the most interesting and little known facts about the blue Great Dane and Great Danes in general. They’re a very old breed, believed to have been introduced more than 400 years ago in Germany. This is a dog that is very large, as you well know. They become very tall and they are very lithe. However, most people are completely unaware of where they developed and how they were bred. It’s not proven, but it’s believed that the Germans began breeding wolfhounds with mastiffs to create a large dog that wasn’t as bulky or large as a mastiff. There are traces of both dog breeds in the Great Dane’s lineage and their looks and temperament, so it only makes sense that this breed might come from this type of parentage. They were bred because the Germans were looking for a large animal that would successfully hunt boar and work as a guard dog, and it worked for them to create this kind of dog.

They are People Dogs

Some people describe themselves as a “People Person,” and it’s the same for dogs. The blue Great Dane is a “People Person,” if you want to get technical. This is the friendliest and most loyal dog you will ever find. This is a dog that only wants love and affection, and needs frequent interaction with his humans. He will not take kindly to being ignored, being left outside by himself or even being left inside by himself. This is the kind of dog that will want to stick to his owner like glue. Sometimes this can be a bit of a problem when you consider the fact that a full grown male weighs an average of 160 pounds, and when he decides he wants to be close to his owner and sits on his lap, it gets a bit heavy. These are dogs that know full well they are large, but they don’t care when it comes to affection and love. They have no problem hopping on the couch to cuddle, even if it’s nearly impossible.