The Australian Labradoodle is a breed that has become increasingly more popular over the years. The breed was born in 1988 when an Australian breeder by the name of Wally Conron was interested in combining two breeds, the Standard Poodle and the Labrador Retriever to give  best qualities they have to offer, in one dog.  Like with any breed, different color combinations are the result, but with the Labradoodles, there are many different versions of color combinations, and probably even more so than with other breeds. As a matter-of-fact, the Australian Labrador has 14 colors of pups that you can choose from and they range in very light creams to different shades of black. Here are the 14 different colors of Australian Labrador Retriever.  (P.S. thanks to Van Isle Doodles for the photo above) 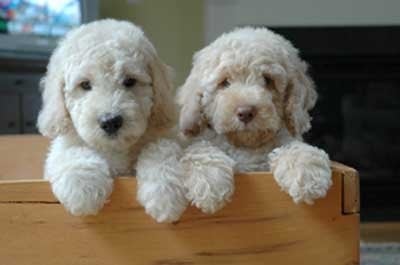 One way to tell if you have a true, chalk white pup is to hold the pup up next to something pure white. Your pup should be more chalky than striking white in order to be considered a true chalk white Australian Labradoodle. Your pup’s nose color can vary between pink or black. A cream colored Australian Labradoodle will vary in shades of various shades of deep golden tones to a deep red color throughout his coat. Although the shades of caramel vary, the overall color should be consistent throughout his fur, from head-to-toe.  A caramel Labradoodle should have a rose-colored nose.  Photo via Rainmaker Ranch Labradoodles. 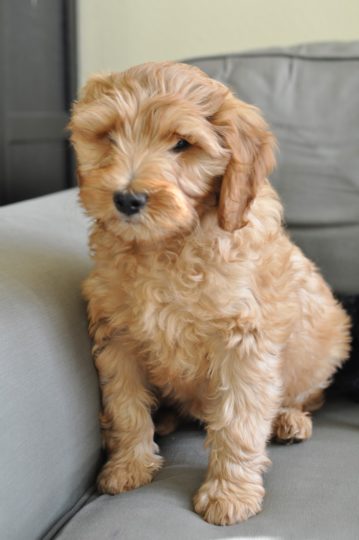 The Gold Labradoodle color should be like the inside of a ripe apricot’s color. When purchasing a Gold Labradoodle, one characteristic to look for is the root-to-tip coloring. The roots of the pup’s fur should not be lighter than the ends, or tips of the fur. Your pup should also have a black nose as part of his Gold Labradoodle features. A Red Labradoodle can range in shades of light red to very dark, deep shades of red. The color should be even throughout the coat and not chunky, or intermittent patches of red. Your pup should also have a black nose in order to be considered a true Red Labradoodle. Café colored Labradoodles have a range of shades, from milk chocolate to a silvery beige. They can have a mixture of the colors swirling throughout their fur or solids. Many times, their final coloring will not be present until they fully mature, between one and three years of age. Look for a rose colored nose on a café colored Labradoodle. 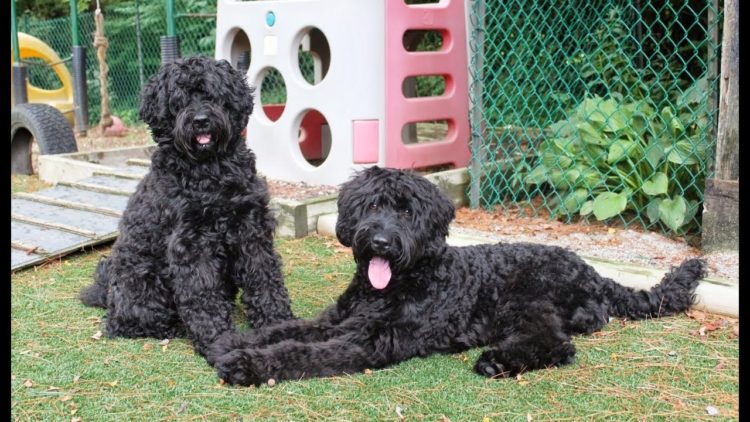 Cream colored Labradoodles are not typically one solid creamy color. They can range in color, from having hints of apricot coloring, to a variety of shades of gold throughout their coat. They can have either a rose-colored nose, or black. Either is acceptable for the cream-colored Labradoodle. 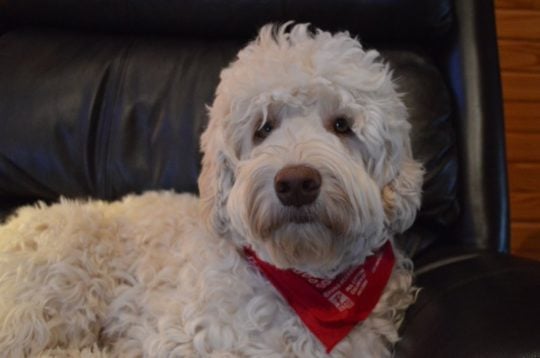 With a black or rose-colored nose, the cream-colored Labradoodle should be consistent throughout his coat with a creamy color. His coat will have hints of apricot or gold shaded throughout. His fur may almost have a “dirty” look to it. 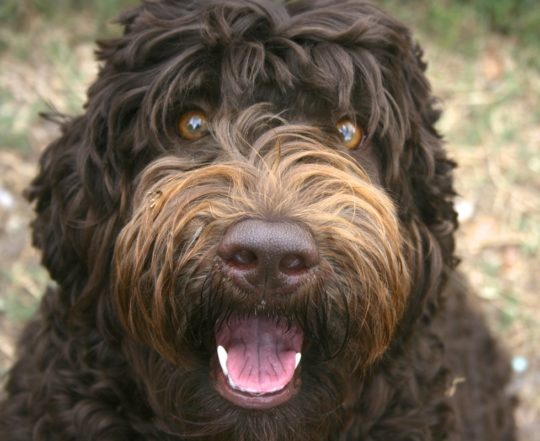 A true chocolate Labradoodle is very dark, similar to dark chocolate candy. At times, it can appear almost black at times in different lighting. He will remain dark throughout his life without lightening up and he should have a rose to rosy-brown nose. Blue Labradoodles are very dark and can almost look black at times. They start their life with a dark black coat and blueish/gray colored skin, then gradually lighten to a smoky black/blue hue. A true Blue will have a black nose to go with his beautiful colored coat. True lavender Labradoodles are a smoky lavender in color with a hint of chocolate tone to them. The colors are nicely melded together and may start off darker when very young. As they mature, the color lightens to the smoky/pinkish hue. Your lavender pup should have a rosy nose. A parti Labradoodle is just that, part one color and part another. The colors are usually made of spots of colors. The head of a parti can be a solid color with a white muzzle, a blaze muzzle, or a combination of the two. There can be saddling colors and the nose can be any color, but should match the color markings of the fur – this is the preferred, for a parti.

Phantom Labradoodles are one solid base color while sporting a distinct, different coloring above each of his eyes as well as on each side of the muzzle, throat and on the front of his chest or chin. He should also have markings of a different color on each leg and foot and just below the tail. The combination of colors is varied and any are acceptable for a phantom. His nose can be rosy or black. Abstract Labradoodles are a combination of colors, with less than fifty percent of the color being white. The remainder of the body can be colored any other color; any and all other colors are acceptable. The nose color should be rosy or black to match the solid base color of his fur.