Everyone knows that a dog and its owner can develop a special bond. If the owner treats the dog well, then the love and affection are usually returned. There are thousands of examples of dogs expressing their love and gratitude to their owner in various ways, and even stories of dogs who have heroically rescued their owner when they were in danger. One example of this was the elderly man who got stuck in the mud and was rescued by his two dogs. According to People, it was recently reported that two dogs in Maryland had come to the aid of their owner. Pete Piringer, a spokesperson for the Montgomery County Fire and Rescue Service in Maryland said that there had been an incident involving an elderly man near the Brookmont Dam along the Potomac River.

Piringer explained that an 87-year-old man had been walking his dogs when he found himself stuck in a mud bank. He tried to free himself, but it was hopeless. His two dogs realized that their owner was in danger and they ran the 50 yards to the path to alert a cyclist. This was necessary because their owner was out of sight from the path, so nobody would have seen him or been able to save him. The dogs barked until they caught someone’s attention. Apparently, the man was walking along the banks of the river at around 2.30 pm when he entered an area that was wooded and muddy. He wanted to let his dogs play in this area and threw them a stick to find. Unfortunately, that was when he began to sink into the mud. The more he had tried to free himself, the more he got stuck and he found himself in a dangerous situation.

He started to call for help, but he had walked too far from the towpath for people to hear. It is only thanks to the intuition of his dogs who realized that their beloved owner was in danger that the man eventually got some help. Thankfully, the barking of the dogs eventually attracted the attention of a cyclist who realized that the dogs were barking for a reason. He followed the dogs, and that is when he heard the man shouting for help in the distance. The cyclist followed the sound of the voice until he discovered the man. The cyclist immediately rang the emergency services to attend the situation and free the man. He then stabilized the elderly man in the mud and kept him calm until the rescue services arrived at the scene.

By the time the crews arrived, the man had been stuck in the mud for over an hour. Thankfully, the crews were able to quickly extricate him from the mud using specialist equipment and techniques. Although the man was covered in mud, he did not suffer any injuries as a result of the incident. The paramedics checked him over, and he refused any further medical attention. The man, who has not been identified, was just glad that he was no longer stuck in the mud. This is just one of many stories about dogs coming to the rescue of their owners at the time when they need them the most. Another story relating to dogs rescuing their owner is the tale of the dog who saved his owner when she became the victim of a stroke. 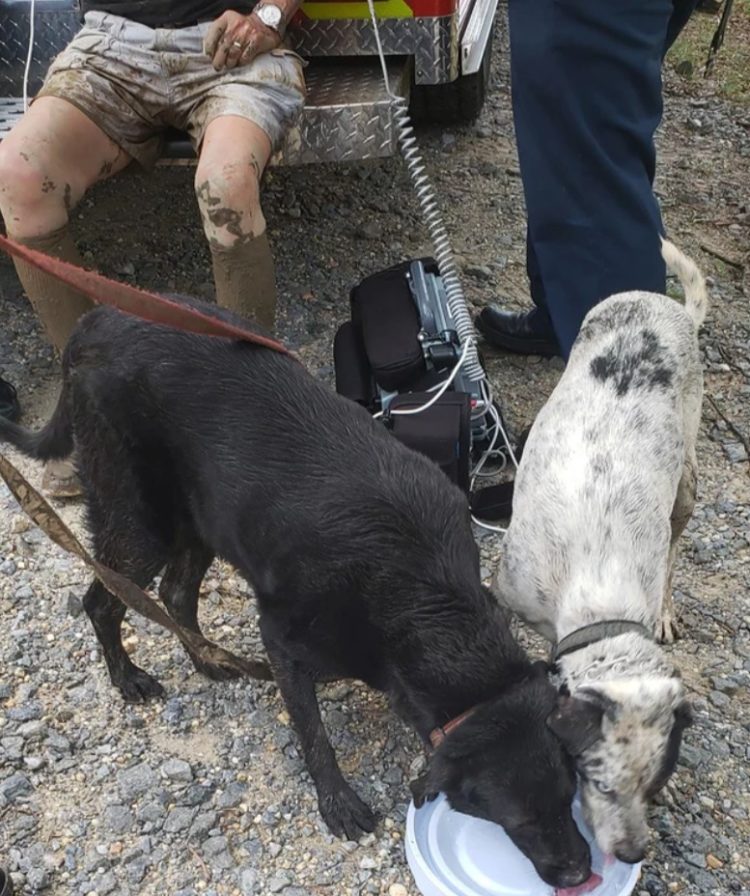 According to People, Maureen Hatcher lives in Florida with her two Labrador retrievers, Bella and Sadie. When Hatcher collapsed at home in December 2018, it was unlikely that anyone would come to her aid as she was in alone with her dogs. Strangely, it was her dogs that took on the roles of her rescuers. After suffering a severe stroke, Hatcher can remember lying on the floor and turning to Sadie. She told her dog that she needed help and both dogs fled across the street to alert a neighbor. Within minutes, the dogs had found one of the neighbors and barked until she followed them back to Hatcher’s home. As soon as the neighbor saw Hatcher, she realized that it was a serious situation and called the emergency services. Without such quick actions from the dogs and the neighbor, it is possible that Hatcher could have waited for hours for help to arrive. The longer a stroke victim waits before treatment, the worse the outcome.

Bizarrely, the whole story of the dogs running for help and the neighbor coming to Hatcher’s aid was caught on camera as Hatcher had a ring video doorbell. This means she has since been able to watch exactly what happened. When the emergency services arrived, they took Hatcher along to a specialist stroke unit in the Baptist Medical Center in Jacksonville. She was then treated using an innovative new treatment that involved specialists removing a blood clot in her neck, as this is where the clot had formed and was preventing blood from traveling to her brain. Medical professionals have since said that the actions of Hatcher’s dogs could potentially have saved her life. If help hadn’t arrived as soon as it did, she could possibly have suffered from severe brain damage or even died.

Strangely, a coincidence took place that day that also helped to save Hatcher’s life. Her front door usually automatically locks when it closes. For some reason on that day, the door did not fully close, and it had remained slightly ajar. It was this strange twist of fate that allowed her dogs to exit the property and get her the help that she so desperately needed. These are just two of the amazing stories of amazing dogs who have demonstrated heroic actions by assisting in the rescue of their owner. There are many more heroic dogs out there, though many of their brave acts go unreported. These examples just show the bond that exists between a dog and its owner.