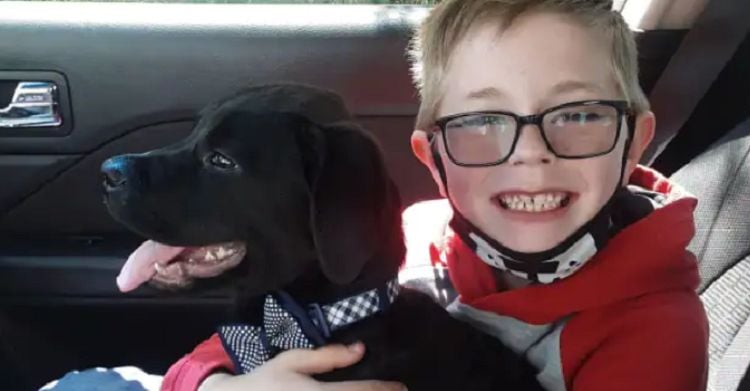 Recently, an eight-year-old boy named Bryson Kliemann made the choice to sell his prized Pokemon card collection. The whole sequence of events happened because his puppy Bruce had become very lethargic, so much so that he was neither eating nor moving. Naturally, the family brought Bruce with them to a local veterinary clinic, which revealed that he had parvo. There was a cure, but the bill would start at $655 for the three-day stay, which wasn’t even including the costs of future treatments. Something that was a serious stretch for the family’s limited budget. Bryson overheard his parents discussing how they were going to pay for the cure. As a result, he made the choice to sell his Pokemon cards for the purpose of saving his puppy. When Bryson’s mother saw this, she chose to post the whole thing on social media, with the result that people responded in huge numbers.

A lot of locals helped out however possible. For example, some showed up to donate money, some showed up to donate their own Pokemon cards, and some showed up to buy Pokemon cards. Similarly, a local brewer held an event called Brews for Bruce, which managed to raise $450 for the cure. However, it is interesting to note that Bryson’s story caught the attention of people from further out as well. For proof, look no further than the fact that even the Pokemon Co. sent him a package of rare Pokemon cards to replenish his collection. Within a short period of time, the family managed to raise enough money to cover the costs of the cure. As for the rest, they have decided to donate everything to help out other Southwest Virginia residents with pets in need. Meanwhile, Bruce is on the mend, a living testament to how people can come together.

How Much Can Pokemon Cards Go For Anyways?

Some people might be wondering how much Pokemon cards can sell for. After all, even the rarest Pokemon card is nothing but a printed card, meaning that it cost very little to produce. However, it is important to remember that something’s value isn’t based on its cost of production. Instead, value is a reflection of the interest of potential buyers. Speaking bluntly, there is a lot of interest in Pokemon cards. The franchise has fallen far from the height of its popularity in the late 1990s and early 2000s. For that matter, it can’t even claim the same popularity that it enjoyed during the mid 2010s, which was when Pokemon Go came out. However, there can be no doubt about the fact that the Pokemon franchise has enormous staying power, so much so that it is still seeing new titles released on a regular basis.

For proof, look no further than the fact that Pokemon Brilliant Diamond and Pokemon Shining Pearl are expected to come out for the Nintendo Switch on November 19 of 2021, which isn’t even mentioning the spinoff Pokemon Legends: Arceus that is expected to come out for the same system on January 28 of 2022. As for the Pokemon Trading Card Game in particular, well, suffice to say that it has been receiving new sets the entire time. Something that doesn’t happen without a significant player base to support such releases. Thanks to this, there is a market for Pokemon cards. Most of them aren’t particularly expensive. For instance, if interested individuals want to buy a Common, chances are good that they can get it for about a dollar. However, if they want to get rarer cards, they can expect those prices to start going up and up. In particular, if interested individuals want to get their hands on some of the most valuable Pokemon cards that can be found out there, they had best hope that they have money to spare. To get an idea of just how expensive these select Pokemon cards can be, consider the Pikachu Illustrator.

For those who are curious, this came from a series of illustration contests held by a Japanese magazine called CoroCoro Comic. Each winner would receive multiple copies of the Pokemon card that used their winning illustration. Furthermore, they would receive a special Pikachu Illustrator card as an official recognition of their skill. As such, when one of the 39 Pikachu Illustrators that are known to exist went up for sale in October of 2019, it managed to fetch a hammer price of $195,000. Similarly, the first, second, and third place winners of the first Pokemon tournament ever held received Trainer cards recognizing their achievements. None of them have been put up for sale. However, they are widely acknowledged to be the most in-demand of the Trainer cards that have ever been issued. As a result, there are estimates of their value to be between $75,000 and $100,000, which are quite believable considering what the Pikachu Illustrator managed to fetch.

What Determines the Prices of Collectible Cards?

Interested individuals can look up the value of specific Pokemon cards on the Internet. Such resources aren’t perfect, particularly when it comes to the rarest examples out there. However, they are nonetheless useful for giving interested individuals a general idea of what to expect. Having said that, there are also certain factors that influence what Pokemon cards are worth, which work much the same as their counterparts for other kinds of collectible cards. For example, the rarity of a particular card is a major factor. Sometimes, this rarity comes from limited availability, as shown by both of the aforementioned examples. Other times, this rarity comes from printing errors, which have happened on numerous occasions over time.

Of course, Pokemon cards with printing errors aren’t valuable unless they are actually rare. There are some examples that are very common, with the result that they just aren’t worth very much. In contrast, others have been known to go for thousands and thousands of dollars. Besides this, it should come as no surprise to learn that condition is another major factor. Simply put, a card that is in either mint condition or near-mint condition will be able to fetch something closer to its full value. In contrast, a card that is either bent, torn, or scratched can expect to lose value for every single one of these imperfections. This kind of damage can happen with ease, which is why people are recommended to put potentially valuable Pokemon cards in sleeves at the very least.