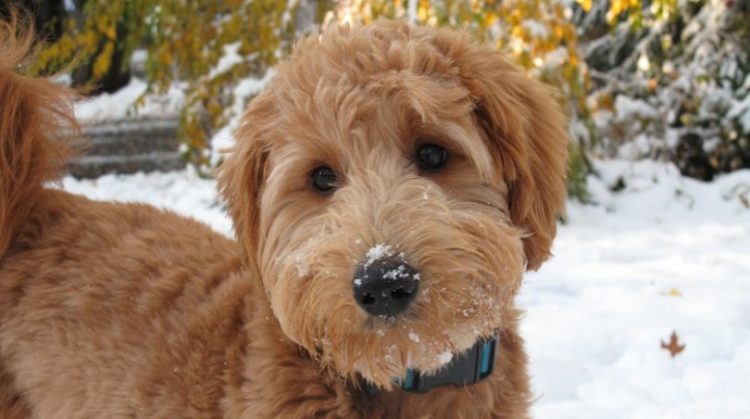 Goldendoodles are a hybrid dog that are the result of breeding a Golden Retriever with a Poodle. They are beautiful dogs that have the best qualities of both breeds, which was what the original plan was when the two breeds were first combined. The one thing that was also part of the plan, was to create a dog who was also hypoallergenic, like the Poodle, so that the breed could be used as a therapy dog for those who had disabilities, could have a non-shedding dog. Golden Retrievers and Poodles are both known for their retrieving abilities when hunting and they are both intelligent and highly trainable, which makes them great family pets. Goldendoodles are super cute and have great personalities, which is why they also make some of the cutest videos. Here are some Goldendoodles caught on tape in their cutest moments, so take a look at the following cutest Goldendoodle videos of 2017 and enjoy.

Well, how do you get 10 Goldendoodle pups into a pen to eat? This owner has her work cut out for her but she has apparently done it before because she seems to know what she’s doing. These ten pups are hungry and the owner has to lure, not just one, not two, but ten puppies into a pen to eat. This is one of the cutest Goldendoodle videos, watching ten puppies try to find their food, and one-by-one the owner gets the puppies to follow her to their pen for feeding time. You’ll see momma Goldendoodle pop in the picture and try to make her way into the pen, herself, and the owner has to shoo her away to let her babies eat. See how cute these guys are by watching the video.

Here are two beautiful Goldendoodle brothers who get together and have a grand time reuniting and playing. They are both similar colors, almost white and very fuzzy, like big white bears. They get together and immediately start having the time of their lives, playing like long lost friends, swimming, playing ball, and running. You feel the excitement for the brothers when they get together, and will feel the sadness for when one has to go home and they separate again. It is one of the cutest, sweetest Goldendoodles of 2017.

2. Goldendoodle gets mad when he loses his ball

These are two of the most beautiful Goldendoodles, thick and fluffy, almost stark white hair and they are outside playing ball. Well, had been playing ball, when one Goldendoodle, loses his ball. While his ball is off in the front yard being retrieved, he has a fit that his pal is still chewing on his. Watch Leo the Goldendoodle start getting upset while waiting for his ball; even trying to steal his pal’s ball while he waits. As soon as his own ball finally gets thrown back into the yard, Leo is suddenly a happy camper once again. Very cute video.

All dogs have a naughty streak and this is one Goldendoodle who put his to work and it was caught on tape. This owner videoed her Goldendoodle’s handy work. See what this adorable Goldendoodle did to get himself into trouble. When she opens the door, it’s obvious that this pup had some serious fun, and it’s all been documented. Watch this video to see how this Goldendoodle gets into trouble for his naughty behavior. It is definitely one of the cutest Goldendoodle videos of 2017.