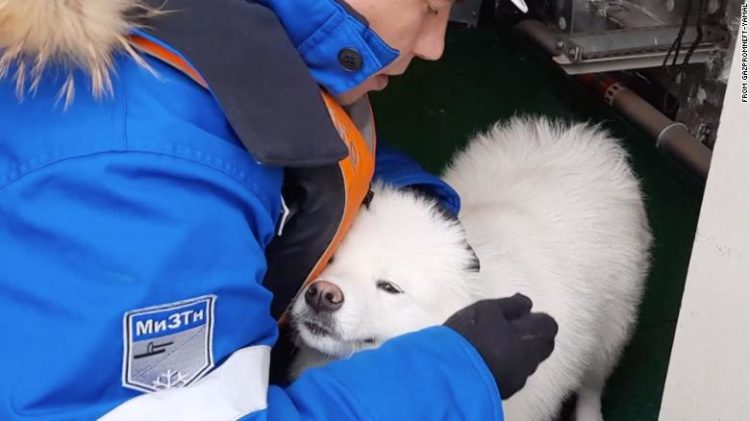 Recently, Russian icebreaker came upon a Samoyed while it was traveling through some ice fields to reach an oil terminal in northern Russia. The dog managed to approach the side of the ship, which prompted the ship’s crew to lower a ladder for her to climb up. After which, they called the local village of Mys Kamenny to see if anyone was missing a Samoyed. As it turned out, the dog was Aika, who had run off while she was being walked around the village. In total, she had been wandering through Arctic conditions for more than a week’s time, meaning that if it wasn’t for the fortuitous encounter, she wouldn’t have survived for that much longer.

How Are These Dogs Capable of Surviving Such Inhospitable Conditions?

For those who are unfamiliar, Samoyeds are medium-sized dogs that can be recognized by their thick, white coats. They are named for the Samoyedic peoples of Siberia, who survived through hunting as well as reindeer herding. As such, Samoyeds were bred by the Samoyedic peoples to be herding dogs, thus explaining much about their temperament.

Perhaps unsurprisingly, Samoyeds are also well-adapted for colder climates. For instance, their coat is double-layered rather than single-layered. The topcoat consists of the longer, coarser hairs, which are responsible for protecting the undercoat. This is important because the undercoat’s shorter, softer hairs are responsible for keeping the animal warm. Thanks to this as well as other adaptations, Samoyeds are one of the dog breeds better-suited for colder climates.

Still, being better-suited isn’t the same as being immune, meaning that Samoyeds can still succumb to Arctic conditions with sufficient exposure. On top of this, it should be remembered that most dogs aren’t used to living on their own. Theoretically, dogs can live in a wide range of environments under a wide range of circumstances. In practice, pet dogs don’t have the education needed to do so, meaning that they have to undergo a painful education of trial and error if they are ever thrust into such a scenario. Something that explains much about why stray dogs have it as hard as they do even when their surroundings are less inhospitable than Siberia.

How Can You Tell If Your Dog Is Suffering from the Cold?

In any case, there are plenty of cold places besides Siberia. As such, it can be a good idea for interested individuals to learn the signs that their dog is suffering from the cold:

There are some dog breeds that are more capable of putting up with cold temperatures than others. However, there are limits to what even the most cold-resistant dog breeds can handle. Due to this, it might be best for interested individuals to keep their dogs indoors when the weather is bad, particularly since there are indoor substitutes for outdoor activities. Excessive exposure to freezing temperatures can cause serious problems, so it can be a good idea to prevent it by just staying indoors during the worst of the winter season.