Home
Dog News
Dog That is too Weak to Walk to his Rescue, Crawls Instead
Prev Article Next Article 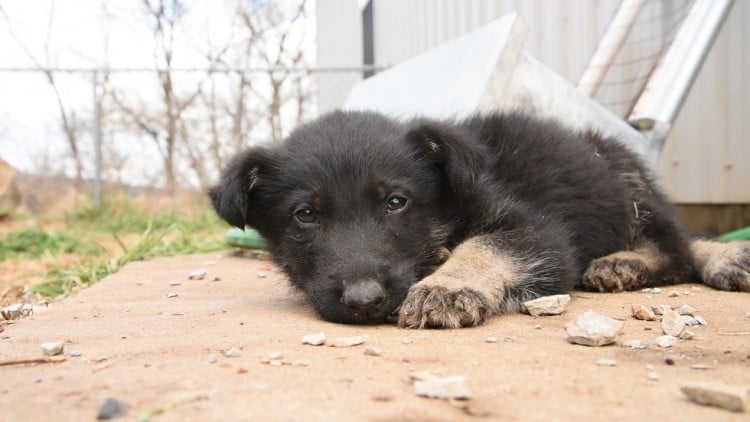 It is a sad reality that there some people out there do not care for anything other than making money and when it comes to dog breeding they will not do one thing to safeguard animal welfare. This was certainly the case at a recent dog rescue effort in Arkansas. At a dark, dingy and feces ridden building in Madison County, 295 dogs were being kept in squallid, disgusting conditions. It was truly dreadful and was one of the worst cases that staff from the Humane Society of the United States had seen in a while.

Dogs had no or little access to food or water and were being kept in awful, often caged conditions. The smell was particularly bad. It was clear that the place had probably never been cleared out. Thankfully, the police and the Humane Society discovered it and were able to rescue all of the dogs. They had probably been bred for pet stores who did not do any of their own checks or sale to individuals who didn’t really care and just wanted a cheap pet.

One of the dogs who was rescued was Daniel, a puppy German Shepherd, who could do nothing other than crawl to safety when the team arrived at the site. He, like many of the other dogs, was extremely malnourished and sickly and was in urgent need of medical attention. This said, it was also clear to rescuers that he had a significant fighting spirit and was determined to live.

All of the dogs were taken to a safe shelter where veterinarians carried out checks on them all and they were gradually nursed back to health.

Two weeks later, Daniel moved in with a new, loving family in Blue Springs, Missouri. They knew of his story and fell for his great attitude and persona. The family do everything they can for him and the shadow of his former self has disappeared. He is bouncy and loves life now and is also very loving to his new family.

The reality is that there are unfortunately lots of illegal dog and puppy mills out there, all keeping animals in horrible conditions and not caring one ounce for their welfare or well being. More effort and resources need to go into finding these places, rescuing the animals, shutting the mills down and finding the animals new homes. This all takes time, money and effort however. The time and effort aren’t so much of a problem, given there are lots of fantastic people like those in the Humane Society of the United States, who are more than willing to dedicate their time to finding these crooks and rescuing the animals.

However, sadly the cost is an issue. They rely on donations and really ned your help in continuing this good work. Hopefully then lots more Daniels can be rescued and kind, loving homes can be found for them. Further, it is not just Arkansas. This is a problem all over the country but likewise you can help solve the problem all over the country. Check out the problem further and you will find out how easy it is to help. Let’s fight against animal cruelty and put a stop to it once and for all!