Stories about people surviving terrible injuries are always heartwarming to read. Similarly, animal lovers find tales of animals surviving a horrific ordeal equally as uplifting. While facing death once and recovering is miraculous, there are examples of dogs that have been in this situation twice. One such dog is Nova, who has survived near-death experiences on two occasions. I Heart Dogs describes how when Nova arrived at an animal shelter, she had been badly bitten by another dog. While this may not seem like a life-threatening situation, the wound was so badly infected that the shelter staff thought she could die. The decision was made that if she showed no signs of recovery in the three hours that followed, she would be euthanized.

Fortunately, there was a group of people who wanted to help Nova and give her the best chance possible. Love Leo Rescue sent one of their foster carers to collect Nova so that she could be taken to their veterinarian for emergency treatment. The foster carer who collected the injured dog said that she had never soon a dog with such a swollen face before. Her next thought was that she had no idea of the extent of treatment and care the young puppy would need to survive.

As soon as Nova arrived at the veterinarian clinic, her wounds were cleaned and she was hooked up to an IV drip to receive fluids and antibiotics intravenously. Nova spent the next few days in the animal hospital to continue with this course of treatment. This made a significant improvement to the infection in her face. This meant that she was then ready to leave the hospital to go to her new foster home. When she was taken to her new foster home, Nova seemed to settle in well and show off her fun personality. The adorable puppy seemed playful and confident. She had two older foster siblings, and she appeared to enjoy spending time with them. Finally, it seemed that Nova was getting the chance in life she deserved. She was happy, healthy, and having lots of fun. 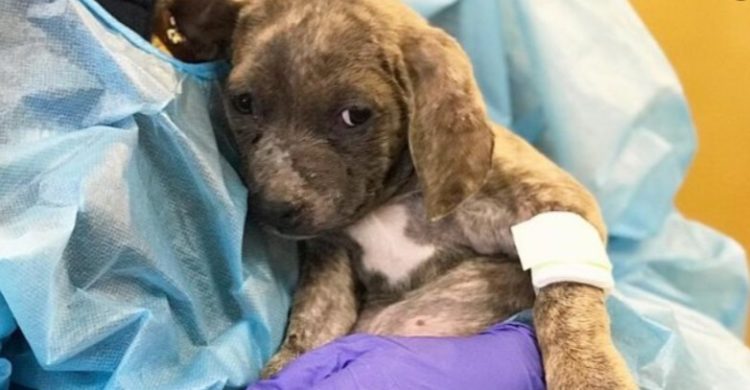 Unfortunately, this brief spell of hope and happiness was short-lived. Within a few days of moving into her foster home, Nova became seriously unwell for a second time. She was very lethargic, and her foster mom realized that there was something terribly wrong with the pup and that she needed medical attention as soon as possible. Nova was immediately returned to the rescue veterinarian that had treated her during her first illness. An examination and tests revealed that Nova was now suffering from Parvovirus. According to Pet MD, this is a very serious virus that attacks the gastrointestinal tract. Two of the main symptoms are extreme vomiting and diarrhea that cause dehydration.

Her diagnosis meant that Nova was readmitted to the hospital where she had recently been treated. While her first stay had been touch-and-go, Nova was now in an even more critical condition. She faced a huge battle to get back to health, and the vet was unsure whether she would make it. The staff at the animal hospital monitored Nova’s condition in the days that followed, and her health fluctuated many times during that period. When Nova’s new foster mom visited her, she was terrified by the seriousness of Nova’s condition.

Although things did not look good for the sick pup, she courageously battled through the illness. To everyone’s surprise, Nova made it through the ordeal and fought her way back to health. It was the second time she had defied death in the space of just a few weeks. Now that Nova had battled her way back to health not just once, but twice, she was finally healthy enough to begin the search for a forever home. Despite the health problems that she had faced, neither her rescuers nor her foster mom was too concerned about people coming forward to adopt the dog. She was so adorable and had such a fantastic personality that it was inevitable that she would soon have a family to call her own.

Nova didn’t have long to wait before a forever home was found for her. A couple called Chelsea and Christina had been watching Nova’s journey on the Love Leo Rescue social media pages, and they had fallen in love with the cute pup. They couldn’t wait to welcome her into their loving home. Finally, Nova had a forever home with loving owners, and she was back to being in good health. Even better, she also had a new furry sibling called Harper. The two dogs have since become the best of friends and play together every day. They often cuddle up together to go to sleep as they like to stay close to each other at all times, if possible.

Although it may have been a difficult journey for Nova to get where she is now, she has everything she could ever want and need in life. Since she has recovered and settled into her new home, Nova has also become an Internet sensation. While she was sick and looking for a forever home, her story was told by Love Leo Rescue. Therefore, she had also grown something of a following on the Internet even before she was adopted.

Since then, Nova now has her own Instagram page called Viva De Nova. This page features photographs and posts about Nova’s adventures with her sister Harper. This page has already proved popular as it has 5,763 followers as of November 2019. The posts demonstrate just how different Nova’s life is now after cheating death twice before finding a loving family with whom she can share her life. Her illnesses are now little more than a distant memory, and Nova can move forward by living life to the max with her two moms and her sister.

Pit Bull Rescued After Being Trapped in a Porta Potty

Neglected Christmas “Miracle” Dog Given Foster Home for the Holidays

The 10 Best Pure Balance Dog Foods on the Market