Sometimes, a dog breed can be further divided into different kinds of dogs. For example, the Labrador Retriever can be further divided into English Labs and American Labs, which can have both behavioral differences and physical differences. With that said, while they are different from one another, both kinds of dogs are still Labrador Retrievers. Here are 10 things that you may or may not have known about the English Lab:

1. More Common in the United Kingdom

Some sources claim that English Labs tend to be easier to train than their American counterparts. As a result, they make better choices for non-professional dog owners, though it is important to remember that easier to train does not mean that dog owners can get away with not training them at all.

On a semi-related note, there are some sources that claim that English Labs are better-suited for conformation shows than their American counterparts as well. In contrast, these same sources claim that American Labs are better-suited for competing in field trials, which are a very different kind of event that calls for a very different set of skills from conformation shows.

4. Neither English Lab Nor American Lab Is an Absolute Term

With that said, it is important to note that English Labs are perfectly capable of participating in field trials and that American Labs are perfectly capable of participating in conformation shows. This is because neither one is an absolute term, meaning that there is plenty of overlap between the two. After all, while they see a fair amount of use, they are far from being officially recognized breeds along with all of the requirements needed for that kind of status.

Generally speaking, English Labs are supposed to look like they have more substantial builds. For example, they tend to be bigger and bulkier, so much so that they come with what are often described as barrel chests. Moreover, English Labs tend to be wider as well as heavier. 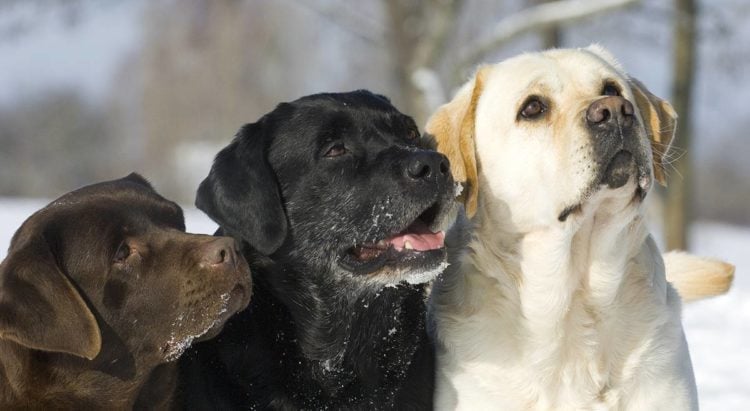 Likewise, the English Lab has been described as having blockier heads than their American counterparts as well. Essentially, this means a wider head with a fuller face, a shorter muzzle, and a more pronounced stop. The result contributes much to the bigger and bulkier-look of the English Lab.

It is said that English Labs tend to be less energetic than American Labs, which have been bred for increased stamina. However, it is important to note that this is by Labrador Retriever standards, meaning that an English Lab is still pretty energetic by the standards of most breeds. Due to this, their owners need to make sure that they receive plenty of exercise on a regular basis if they want to keep their dogs in good health.

With that said, English Labs are said to have calmer, more obedient temperaments. This is why they are easier to train. Moreover, this is why they make good choices for house pets, particularly since their less energetic nature means that they put a smaller demand on the dog owner’s limited time and attention.

Having said this, both English Labs and American Labs are Labrador Retrievers. As a result, they are smart, affectionate, and downright eager to please. Due to this, both kinds of dogs can perform well in a wide range of roles despite the differences between them, meaning that interested individuals shouldn’t get too stressed out when choosing between them. For that matter, there is considerable overlap between the two, meaning that there is no guarantee that different comparisons are always going to generate the same differences.