The Entlebucher Mountain Dog is a Swiss breed that has seen a fair amount of use for herding over the course of its existence. It possesses a lot of similarities with other working breeds, so it should come as no surprise to learn that it can get along very well with humans under the right circumstances. Here are 10 things that you may or may not have known about the Entlebucher Mountain Dog:

1. Named for the Region

The Entlebucher Mountain Dog is named for Entlebuche. Said location is a part of the Swiss canton of Lucerne, which can be found towards the center of Switzerland. It is interesting to note that Entlebuche is included in the World Network of Biosphere Reserves, which are meant to promote sustainable development by maintaining a careful balance between humans and nature.

2. Sometimes Called By Similar But Not Quite the Same Names

3. It Is a Sennenhund

The four kinds of Sennenhund are molossers who work as farm dogs. In short, molossers are big, solid dogs that are believed to be descended from a breed that was popular in the Molossus region of Epirus centuries and centuries ago.

5. Sennenhund Means Dog of the Senn

Speaking of which, Sennenhund can be translated to “Dog of the Senn.” Here, Senn or Senner refers to herdsmen working in the Alps who often tended the cattle and other livestock of people for them. The Sennenhund served as a cattle dog, but it was known to have performed in other roles such as guarding homes and protecting livestock from predators. It is interesting to note that the last role is seeing something of a revival because of the reintroduction of wolves to the region. 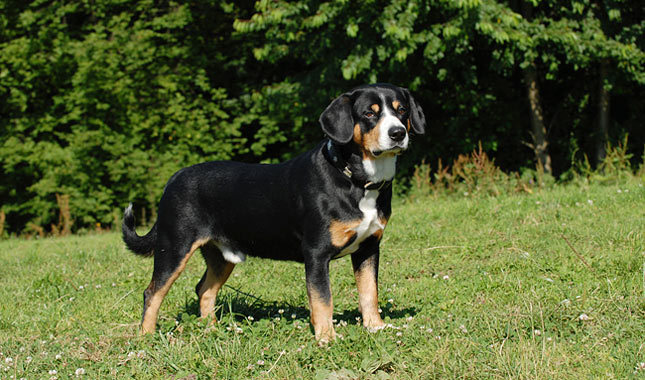 It wasn’t that long ago when the Sennenhund suffered a serious decline in their numbers. In particular, the biggest dogs saw the biggest fall because they became less and less useful for pulling carts and other physically-demanding tasks because of mechanization. The Entlebucher Mountain Dog was no exception to this trend, as shown by the fact that members of the breed couldn’t be found at first following the First World War.

Eventually, interested individuals were able to find a total of 16 dogs belonging to the Entlebucher Mountain Dog. As a result, they founded the first club for the breed in 1927, which launched an effort to revive the breed over time. Considering its circumstances, there is a good chance that this is the reason that the Entlebucher Mountain Dog has made it into the present instead of having gone extinct.

Unfortunately, the small number of dogs counted in the foundation stock means that the Entlebucher Mountain Dog is rather prone to congenital defects such as hemolytic anemia and hip dysplasia. Suffice to say that inbreeding has its issues.

Since the Entlebucher Mountain Dog is a working breed, it should come as no surprise to learn that it tends to be friendly towards those who are familiar to him. Combined with their general sense of devotion, this can make them a good choice for someone who wants a canine companion provided that they can make sure that their dog gets enough exercise and other forms of stimulation on a regular basis.

10. Can Be Reserved Towards Strangers

While the Entlebucher Mountain Dog is friendly towards its own family members, it tends to be much more reserved towards strangers, which makes sense because of how much use it has seen as a guard dog. With that said, early socialization with both dogs and humans is needed to prevent this tendency from developing into something that is actually problematic.