When you hear the word “Chinook” what is the first thing that comes to your mind? For some people it is the Chinook winds that are cold and biting and cross the lands of Canada and the United States. To others, it brings up images of the North American Native tribe that has its roots in the states of Washington and Oregon. Military types will recognize the Chinook name as a helicopter. But a Chinook is also the name of an AKC registered dog, one of the rarest breeds that you will come across. The breed has some unique traits and characteristics, and so here are 10 of the lesser known facts about this amazing dog.

1. They are an all-purpose sled dog.

This makes sense given its roots and history place it in the colder climes of North America. Usually Huskies and Alaskan Malamutes are most often thought of, but the Chinook is a very large dog, and whether male or female, very capable of pulling their own weight – and then some.

2. The Chinook is actually a great dog for the home and family.

As with any large dog you need to be able to afford to feed it, but despite its usefulness as a sled dog it is quite comfortable in a warm home surrounded by a loving family. They have a very sociable personality, and their temperament is suitable for a domestic situation.

3. The breed was actually developed in the state of New Hampshire.

The dog has earned the distinction of being named the State Dog of New Hampshire. The logical question is how did a dog get the name of a Native American tribe that is on the other side of the country? There is certain a great story that goes with the answer to this question. What we do know is that it was bred to be the aforementioned sled dog in the early 1900’s, and the rest is history.

4. The story behind the name.

One of the original puppies bred by Walden, who was the original breeder of the line, got the name of Chinook. Chinook happened to be the name of a non-Chinook breed that led a sled dog team Walden used during his days in the Canadian Yukon. This was the first team that would introduce sled dog racing as a sport. Walden loved the dog enough (they won) to name the first of his new breed litter after him, and the name stuck.

5. They are an argument against neutering.

Though we often hear that we should get our dogs spayed or neutered to control the pet population, the neutering of the Chinook reduced its numbers to as few as 28 less than 50 years ago. The reason for its near extinction was that so many were neutered or had become old that it was nearly impossible for them to reproduce. Their number was down to 11 when three breeders took on the challenge of saving the breed from extinction. Today their numbers are rising, currently at about 1,000. 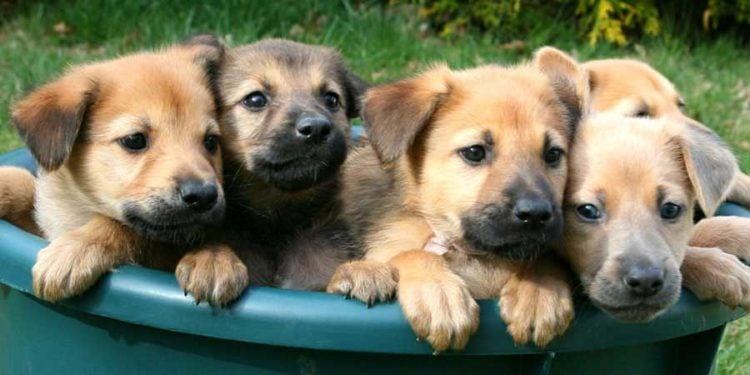 6. It wasn’t until 2013 that they were officially recognized.

The American Kennel Club took until 2013 to officially recognize the breed as worth of being included in its membership, though it had been recognized as the State Dog of New Hampshire years earlier. Such things are odd in the world of the AKC but at least the breed has achieved its proper American recognition.

7. The male and female of the breed can be easily distinguished.

If you look at many breeds from the front (not the back) it is often difficult to know whether a dog is a male or female, even for professional breeders. The Chinook breed has a very distinctive look between the male and the female, making identification easy. The “official” explanation is that the female definitely looks feminine, though we can’t be sure exactly what that means except that the female is about 2 inches shorter at the shoulder.

8. They shed more when they are spayed or neutered.

This is not an anti-neutering article, but when it comes to the Chinook, refraining from such procedures will actually be beneficial to you and the survival of the breed. They are seasonal shedders, so either way you will still have to deal with it, but the evidence shows they shed less when left in their natural state. It’s good for them, and good for you. They are average maintenance when it comes to grooming, so nothing to worry about there.

9. They love to pull things, according to the AKC.

We’ll take the AKC at their word on this one, but just how do you know this to be true? Obviously they are outdoor dogs that are strong and bred especially for the purpose of being sled dogs, and have a history of winning sled dog competitions. As for anything beyond these accomplishments, we leave it to the reader to decide.

10. You can find a variety of ear types with this breed.

Many dog owners have a preference on the type of ears their dog has. Some like pointed, like the German Shepherd, while others like floppy, like the Spaniels. With the Chinook you can find the drop ears, pricked ears, and even propeller ears (the kind that hang down at the top even when they are standing up).

A Complete Price Guide For the Chow Chow

A Complete Price Guide for the Bichon Frise