Even though dogs are not aware of what birthdays are, that does not mean that we don’t like to make a fuss of them on their special day. The dogs themselves will also definitely appreciate all the attention and extra treats that they get. There are not many people that could say they went to the effort that Maxx Chewning did for his dog on his first birthday. He dedicated the entire day to Dood and was determined to give the pup the best day of his life. Dood has always made Maxx feel loved and he wanted to make Dood feel the same way. The day started off with a walk in the park. This is something they do everyday and so Maxx knew that he had to make it extra special. It was a longer walk than usual and Dood had all the time he wanted to practice his favorite tricks. They also stopped off for a puppuccino while they were out for their walk.

One of the highlights of the day was viewing the electronic billboard that Maxx had organized to celebrate Dood’s special day. The billboard read Happy Birthday Dood and there was also a picture of him so everyone could see whose birthday it was. The billboard was located above a gas station and so a lot of people would have seen it throughout the day. Maxx hoped that this would brighten the day of anyone who saw the billboard. The company that designed the billboard had not had a request for anything like this before, but they were more than happy to help. They were glad that they could play a small part in the day that Maxx had planned for Dood. The Dodo reports that Maxx’s friends had questioned why he would want to spend so much money on a billboard that Dood could not even read. He replied that he does not have a girlfriend and he would rather spend his money on Dood than on a girl. 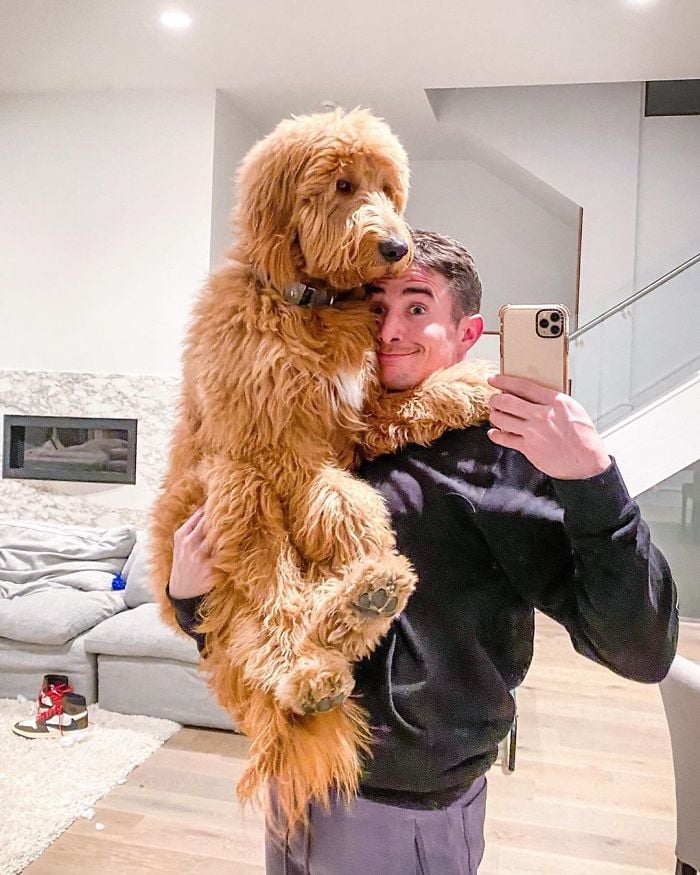 Dood did not seem to be too excited about the billboard but he did perk up when he and Maxx stopped for special doggy birthday cake. Dood was happy to eat the cake off the floor which meant that Maxx also had to get down on the floor with him. The cake was in the shape of a bone and it did not take Dood long to get through the cake. After the cake, Maxx and Dood took a trip to the local pet store where Dood was treated to some toys. Maxx also bought some more of his favorite doggy food treats. By this time Dood must have been wondering what he had done to deserve so many treats in one day. However, the fun was not over yet as Maxx had one more surprise to end the day on a high. The day ended with another stop in front of the billboard. By this time the billboard seemed a little brighter as it had already started to get dark and this mean that it caught Dood’s attention a bit more this time round. Even though he was not really aware of what was on the board, by this time he must have been feeling very spoiled. He would have definitely felt the love from Maxx and realized that today was something different compared to any other day.

When the day was over Maxx posted photos of the day on his Instagram account. He also created a photo montage of time that he and Dood have spent together in the past year. Dood is still a pup but his large size sometimes makes people think that he is older. He loves nothing better than cuddles with his owner but it can sometimes be quite difficult for Maxx to lift him because of his size. Many dog owners like to share photos of their dogs on social media and Maxx is no different. It is clear from the photos that he shares that he and Dood have a very close bond. They spend a lot of time together and the two of them are best friends. Maxx has to travel quite a bit for his job and if he is going anywhere in the United States, then he takes Dood with him.

Maxx has a fitness channel on YouTube and Dood features in several of his videos. He told Bored Panda that if Dood does not appear in a video, then he gets inundated with messages asking where he is. Maxx has joked that some of his subscribers aren’t all that interested in fitness, they just watch his videos because Dood is in them. Maxx has made such a fuss of Dood for his first birthday that people are already wondering how he is going to top it next year. The dogs first birthday is always a special one and so Maxx might not make quite as much effort when Dood turns two. Hiring a billboard may not be something that he does every year, but there is little doubt that Maxx will always make a big fuss of Dood when it is his birthday.

The story of the effort that Maxx made for Dood’s birthday has captured the hearts of people all over the world. While they may not hire out a billboard, it has made them think about something special that they could do with their dogs to celebrate their birthday. Maxx is a hard act to follow but the main thing that people have taken away from this story is that people should take whatever opportunity they can to show their dogs that they love them. This is something that everyone can do for their dog on their birthday. Even though Dood might not have been aware that it was his birthday, he certainly would have felt the love from Maxx throughout the whole of the day. It was a memorable day for both Dood and Maxx, and for anyone that saw the billboard.