There is no better story than that of man’s best friend. Dogs and humans have evolved to be compatible over the years, so it’s no surprise to see that the bond continues to hold. A recent story about a boy and his loyal dog have been making the rounds as an example of true love and loyalty. It is hard to imagine that a connection between a boy and his dog have formed this quickly. This particular story revolves around a loyal pup named Dash and his best friend; a young boy named Peyton. It is a remarkable story of courage and dedication, as the pup follows the boy wherever he goes. Dash was just a puppy when he was brought into a new family just over a year ago. He has quickly integrated himself as an essential addition. Now the Smith family can’t imagine their lives without the gregarious pup.

Dash and Peyton spend many hours of the day together. The family has even posted pictures of their adventures on an Instagram account. Wherever the boy goes, the young pup is soon to follow. Though nobody realized the bond that these two had until an indecent that recently surfaced. Peyton had gotten into a quarrel with his sister and it was determined that a timeout would be an appropriate punishment. The boy was distraught as he had to face the wall think about what he had done. Alone in the corner, it felt like this punishment was never going to end. Then a small miracle happened. The entire Smith family watched in awe as the young pup went into the corner to comfort the young boy. The moment was captured for everyone to see as the family looked in shock at their loyal puppy. It quickly warmed everyone’s heart to see that the pup had gone out of his way to comfort the young boy.

The photo was captured and quickly went viral through various internet blogs and social media postings. It was a photo that captured a truly special moment between a boy and his dog. The photo caught fire and quickly spread around the internet. It came as quite a shock to the Smith family who didn’t realize that the photo was particularly special. It was not too long before they were inundated with messages, requests, and praise. There were also offers that were quite amusing. One person even made artwork of the picture and intended to send it as a tribute to Dash and Peyton. It seems that people just connect intimately with the photo. There is something that is particularly special about the bond between a boy and his dog. This has been an interesting turn of events that everyone has found shocking, but it is nice to see that Dash is getting some recognition for his loyalty. 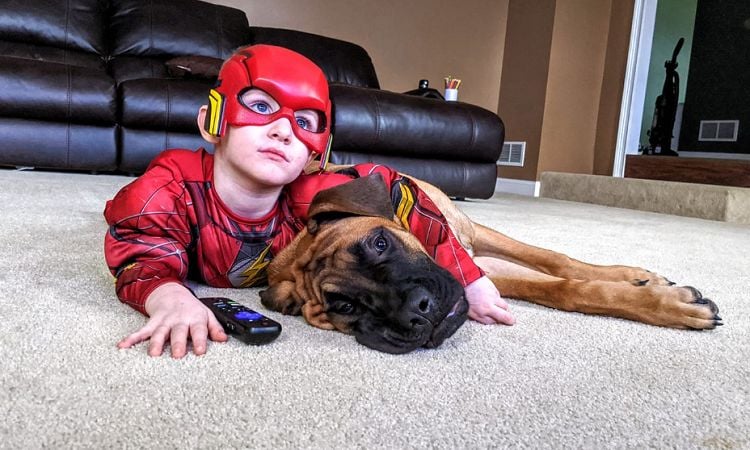 The adventures that await these two are quite exciting. Dash and Peyton are a great reminder of how quickly a dog can become a boy’s best friend. While standing in time out, one has to wonder what was going through the young boy’s head. Did he regret hitting his sister? Or did he only think of it as an injustice? Judging from the look on his face, he knew that he had done the wrong thing. When someone makes a mistake, it is nice to have someone else to cheer them up. In this case Dash decided to go into the corner and make sure that the boy did not feel alone during his time of need. This is a lesson that everyone can take away: forgiveness is an important part of healing. It just took one simple act of loyalty for us all to remember what is important in life. Dash is truly a legend!

It is always nice to find new sources of inspiration. With all the crazy things going on in the world, it is helpful to be reminded that there are certain things that still remain true. The loyalty of a dog is not something that should ever be taken for granted. It has been said that presence of a dog is a gateway into a more conscious existence. This is because when someone looks at a dog, there is no judgement when the dogs looks back. In this sense, the dog’s eyes are a portal to the soul. This is another useful lesson that anyone can take solace in a healthy relationship. It is clear that Peyton and this young pup have a special connection that will not be broken for life. It will be exciting to see how the internet continues to share their story and sing their praises.

The family also seems to be getting in on the excitement as well. After he made up with his sister, Peyton has a new lease on life. They are using this opportunity to spark positive change in the community. Peyton’s mother has been shocked by the response, as she didn’t seem to realize that the photo would have the impact that it did. Though it is clear that the internet is taking the photo as a symbol of love, compassion, and loyalty from a most incredible dog. This is also particularly impressive because the pup is still quite young, even though he shows wisdom beyond his years. There is no doubt that this ferocious little pup will continue to win hearts and minds for the foreseeable future. This is something that we all can look forward to.

It will be fun to see what Peyton and his dog’s adventures will be. We all will be watching eagerly to see his next adventure. There is no doubt that Peyton’s sister will get in on the act too! This is a wonderful family that will continue to set an example for everyone. This is a great story to remind us of the good things that are happening in the world. And a reminder of what is important going forward. All of this thanks to a simple act of love. Thank you, Peyton and Dash, for showing how to be better people!