Whenever a dog arrives at a rescue shelter, the aim is always to find them a home as soon as possible. The first step towards reaching this aim is to make sure that the dog is in good health. The staff at the shelter will then use a variety of methods to advertise the dog to potential adoptive families and will introduce the dog to visitors to the shelter. Often, this is all that is needed to find a dog its forever home. Sometimes, extra steps are needed to give a dog a little extra help finding someone who wants to take them home. This may involve taking measures such as creating a story about the dog to feature on social media appealing for people to come forward to adopt the dog.

Another important step is to make sure the dog is looking at its best. Apparently, appearances really matter as the first impression that potential adoptive families have of a dog is its appearance. While some dogs are lucky enough to have natural beauty on their side, others need a little help to make the most of their best features. This is something that the team from Rover, a dog sitting service, understood and they decided to give a lucky group of shelter dogs a makeover to help them find their forever home. They hoped that the makeovers would make the dogs stand out from the crowd.

Rover teamed up with Wag Your Tail Photography and Max Fund animal shelter to give the dogs a pampering session in celebration of National Adopt a Shelter Dog Month. In addition to the group of dogs getting the pampering session and makeover, they would each take part in a photoshoot to show off their before and after pictures. According to I Heart Dogs, the purpose of the photoshoot was to raise awareness of shelter dogs who need a new home.

It was also to help Rover promote their new in-home grooming service that they are offering to customers in Denver. This convenient service involves a professional and experienced dog groomer coming to your doorstep to groom your dog in the comfort of their own home. All dogs get a bath, a haircut, a brush out, nail trim, ear cleaning, and even anal gland expression. The prices for these services vary according to the size of the dog. Tavia Starling, a dog groomer from Denver who is working for Rover, talked about the experience of giving the shelter dogs a makeover. She said that she had found it very fulfilling giving the dogs a much-needed transformation which allowed them to show-off their true potential. She hopes that the dogs are able to find their forever home as a result of the transformation. 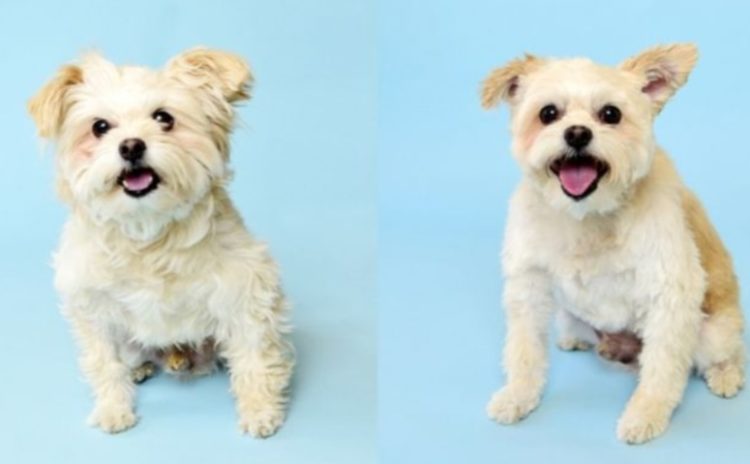 The before and after photographs of the dogs are amazing, and it is not just the changes to their physical appearance that shines through. On each of the after photographs, it looks as though the dog is smiling and you can see happiness shining out of their eyes. The photographs could really help the dogs to find adoptive parents as they truly look fantastic, thanks to the skills of the groomers. Although these dogs got a full pamper session, even taking a few small steps to improve a dog’s appearance can make a difference, notes Alexa Beale who is a volunteer coordinator with MaxFund. She says that even having a bath and a simple nail trim can improve a dog’s appearance and increase its chances of finding a family.

Many of the dogs have suffered terrible experiences during their lives, so a day of pampering was a real treat even if they do not find a new home straight away. However, it is hoped that the makeovers will lead to a long queue of people who are keen to adopt one of the dogs. Improving a dog’s appearance to help it find a new home is not a new idea, but it is one that has had lots of success as there are many more stories of dogs receiving a makeover and then finding their forever home.

This is a topic that was covered in The Telegraph. Their report says that many animal shelters in the UK are using dog groomers to give dogs makeovers as a strategy for helping them find new homes. One of the most popular cuts is the teddy bear cut, as this seems to massively appeal to potential adopters. Experts have said that the transformation is about much more than the dog’s physical appearance, as there is some evidence that the makeovers can also improve a dog’s behavior. This can improve their chances of becoming an instant hit with families.

One rescue center that began using this strategy was Wood Green rescue center in Godmanchester. They first began grooming dogs in response to an increase in the number of dogs arriving at the shelter in a poor condition. One possible reason for the rise in dogs with coats in a poor condition is that their original owners could not afford grooming costs. Not only did the appearance of the dogs change, but the dogs also seemed much happier once they had been groomed. This is probably because a matted coat can cause a dog a lot of distress and even discomfort. It was also noted that the dogs looked much younger after they had been groomed as a matted coat can age a dog. Looking younger is another factor that has the potential to increase the likelihood of them being adopted.

This shelter had many examples of dogs that had arrived looking terrible but became cute and appealing animals after being groomed. The staff at the shelter noticed that there was a direct correlation between having the dogs groomed and an increase in the number of people coming forward to adopt the dogs, thus decreasing the length of their stay in the shelter. This further supports the theory that dog grooming truly can help shelter dogs to find a forever home.