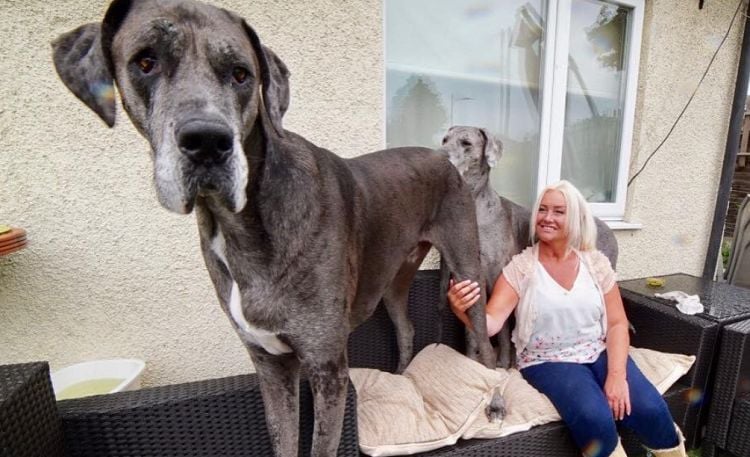 There’s no doubt about it, walk down the street with a Great Dane and you’ll definitely turn heads. Today’s Great Dane’s are the product of breeding Irish Wolfhounds, Mastiffs and Greyhounds. Together, those breeds would create a brave, well-muscled, and fast dog that would also be sweet, loving and loyal. As you can see, the Great Dane is quite the package. No wonder it ranks as the 15th most favorite dog for individuals and families alike. Sounds like a great dog, right? Well, they are, and we have a fabulous Great Dane to introduce you to today: Enormous Freddy, or just plain Freddy, for short. Freddy is a celebrity dog of sorts, as he’s amassed not just one, but two Guinness Book of World Records Awards for himself. In 2014 he become Britian’s largest dog, in 2016 he become the worlds biggest dog, and in 2017 he become the world’s oldest Great Dane!

Who is Enormous Freddy?

For those of you out of the loop, know that Enormous Freddy is first and foremost, the worlds tallest dog. When standing on his hind legs, he reaches an impressive height of over 7 feet tall! In fact, in 2017, Guinness Book of World Records welcomed Freddy as the world’s tallest dog. Freddy resides with his owner, Claire Stoneman, and his sister Fleur, from the same litter, in Norfolk. Fleur didn’t grow as Freddy did, and is around the expected size and weight of an average Great Dane. It’s when you see photos of them together, that you can really gauge Freddy’s height and weight, as he completely dwarf’s Fleur.

But here’s the best part: Freddy was born in 2012, and was the runt of the litter. However, with love an good food, Freddy was transformed from a lightweight runt, to a lovable and quite massive canine! When a puppy like Freddy is referred to as the ‘runt’ of a litter, it means they are the smallest, and most frail puppy among their litter mates. Furthermore, runts of the littler risk suffering health issues if they’re underweight. Referring to her little, newborn charge, Claire states, “‘Freddy was such a poor eater. I tried everything,’ says Claire. ‘I suspect I rather spoiled him. And then last year he just sort of took off.’

Not only is Freddy tall, but also hefty, weighing in at around 220 pounds. If you’re sitting there and wondering what it’s like to feed such a large dog, well wonder no more, as his Claire spends a total of $630 a month on dog food. Claire feeds both Great Dane’s healthy foods. According to Claire, ‘They have their normal kibble with minced beef in the morning, roast chicken with kibble in the evening and a lot of treats throughout the day; their favorite is wonky chomps and they go through about four packets a day.”

Freddy may be massive, but he’s a gentle soul. When those he knows are sad or upset, he approaches them, and wraps his paws around their necks and cuddles them. On the same token, when it comes to little children he’s an absolute angel. One such child is 7 year old Erin Manley, Freddy’s neighbor and best friend. Erin has grown up with Freddy, and has no problem with Freddy’s great size, always hugging and cuddling the gigantic canine. In fact, Erin has been known to ring up Freddy, and send him good wishes before bedtime!

Born on May 17, Enormous Freddy and sister Fleur just had a birthday, and owner Claire Stoneman threw them a fabulous outdoor birthday party stating, “Freddy and Fleur had a great birthday party, and they both had the best time. We decorated the garden, and they got loads of their favorite treats and cuddly toys,” But, this wasn’t just any birthday party. In reality, on May 17, 2020, Enormous Freddy reached another milestone, by becoming the world’s longest lived Great Dane, at eight years!

Why Being 8 Years Old Makes Freddy So Special

For those of you reading this who have had dogs live up to 10, 15 or even 20 years, you may be wondering what all the fuss is about. Well, that’s because Freddy is a Great Dane. In point of fact, the Great Dane is a breed that has a very short lifespan, especially when compared to other dog breeds as you can see by the sample below. Sadly, some Great Danes may live only 5 to 7 years.

But why do Great Dane’s have such a short lifespan? In truth, no one really knows. After all, in the wild, large mammals such as elephants live a quite a long time compared to a rabbit. Yet in the dog world, it’s the larger breeds like the Irish Wolfhound have extremely short lifespans, while the Pekingese can live almost twice as long. Scientists have developed a few theories, but so far, none of them stick.

However, while there is no concrete evidence to support any theory as to why small dogs outlive large ones, there are some factors to assist your large dog to live a healthy and long life. For instance, never overfeed your dog, as all of that fat equates a higher risk of disease. Also, consider getting them ‘fixed’, as it can help to increase your dogs lifespan. Other factors include a low-stress happy home, exercise, and regular veterinary exams.

Keeping Up With Freddy

If you’d like to keep up with Enormous Freddy, know that it’s quite easy to do so, as both Freddy and Fleur maintain a healthy presence on social media. Claire has created an instagram account for her dogs, as well as a Facebook page. For additional pictures and info on Freddy, you can also visit his webpage.