The Tibetan Mastiff is a tall, heavily-boned dog with sturdy muscles and skeletal structure. It is a guardian dog, which is used to watch over flocks, herds, villages and nomad camps, palaces and monasteries. There are two types recognized by breeders, and these are described as Lion Head, the Tsang-khyi; or Tiger Head, the Do-khyi. The Lion Head, sometimes referred to as the “monastery” variety, has a mane or ruff which extends from its forehead to its withers. The Tiger Head, sometimes referred to as the “nomad” variety, has shorter hair but is the larger of the two. Both varieties can be born in the same litter of puppies and are placed into work based on size and variety.

The Tibetan Mastiff is not actually a true mastiff in regard to the English use of the name. The first visitors to Tibet were accustomed to calling all large dog breeds “mastiff”. Experts suggest that the breed should more properly be called a Tibetan mountain dog.

There is also scientific evidence that suggests that the Tibetan Mastiff may be the ancestor of the Rottweiler, the Saint Bernard, the Great Pyrenees and the Bernese Mountain Dog.
The breed has a large broad head and skull with deep-set, slightly slanted eyes. The nose is typically square shaped with a fleshy, padded muzzle. Its tail is curled and carried jauntily over its back. Distinctive features include facial wrinkling and a double coat. The coat can be black, brown, varied shades of pale gold to red gold, or blue-gray, with tan markings on all colors or some white markings. 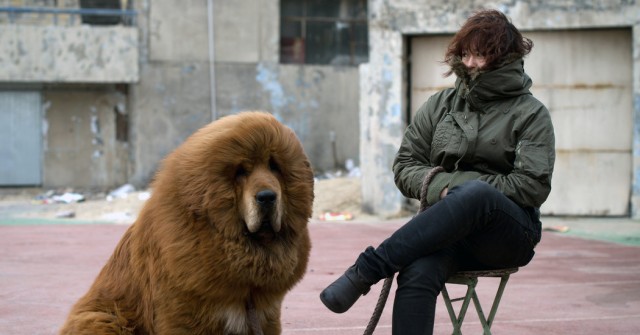 This dog breed is an ancient type of large Tibetan dog. It is part of the nomadic cultures in Tibet, China, India, Nepal and Mongolia. The Himachal Pradesh, which means the “snow-laden region”, is a state in northern India where local tribes used the Tibetan Mastiff to protect sheep from predators. The breed was useful in guarding against wolves, tigers, bears, leopards, and other carnivorous mammals such as weasels and ferrets.

Because the Tibetan Mastiff is a guardian dog, used primarily for protecting livestock against predators, it will bark as warning and scent mark the area it is guarding when used as a work dog. When kept as a pet, it still exhibits these tendencies. It is the product of selective breeding over centuries, and tends to stay awake at night to protect its family and property. It can have an easy going nature, but it is said to be independent and aloof with strangers. It can bark during the night at neighbors, because it considers them as possible intruders and threats. It tends to sleep in the day, and remain alert, on guard, all night.

A Tibetan Mastiff is stubborn, intelligent, powerful and strong-willed. It needs to know that its owners are the leaders in charge, and it must have consistent discipline. It is not a good choice as a first dog. It requires organized routines and schedules to keep its naturally protective instincts in check.

Though this breed is a large one, it is not excessively so. Male dogs range from 26 to 29 inches tall at the withers, while females range from 24 to 27 inches tall. The dogs are slightly longer than they are tall. They have a strong gait and are very agile when running, even though their paws tend to be compact in size and appearance. They need plenty of room to romp and play due to their size and nature. When indoors, they can be quiet and reserved. 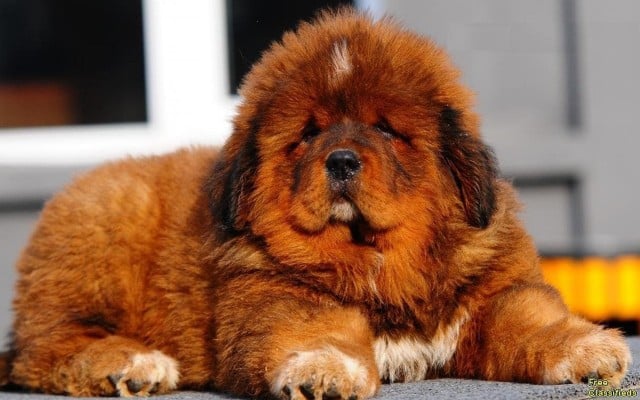 Several characteristics are unique to the Tibetan Mastiff. Females have only one estrus period per year, which is usually in the fall. Females take about three to four years to mature, and males about four to five years.

These dogs keep their double coat all year long, but shed a little during the spring and summer depending on the climate. Females who are whelping can blow off their coats all at one time two times each year. It takes about eight weeks for normal shedding. They must be brushed regularly during this time. They keep their long guard hairs until the fall, and then their undercoats begin to grow in again.

They can roam when not kept in a fenced in area or a kennel run. They are prone to exploring neighborhoods when not restrained; similar to cats in their behavior.
They have large, destructive jaws which are capable of chewing through chain link fences, doors, concrete foundations, and many other structures in their living areas. They can chew to destroy most anything until they are about three years old, and they are particularly good at digging holes in yards and landscaping.
When a puppy is raised to grow up with a family, it can be very social and patient with young children. They need to be integrated into any family setting, but they are terrible about obedience training because they prefer to make decisions for themselves.

Tibetan Mastiffs have a life span of approximately 10 to 12 years.

The coat of the Tibetan Mastiff is beautiful, but it does completely “blow” off in a very short period of time once or twice a year. Breeders warn prospective owners that a good vacuum cleaner is necessary during this time period. Expect to brush the dog daily to keep its coat in good order. The complete undercoat will shed over a span of four to six weeks. 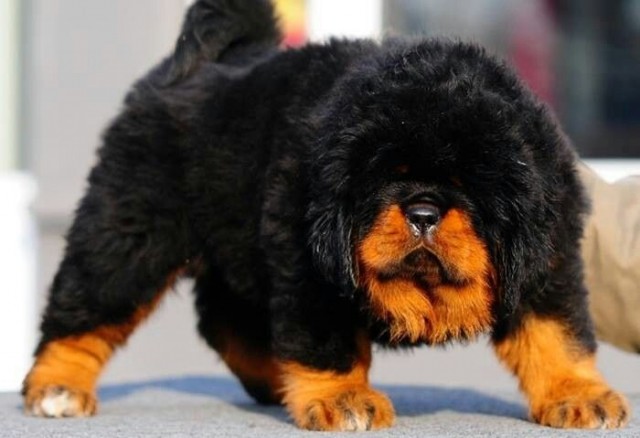 Puppies are easy to housebreak. They must be kept on a leash every time they go for walk, even as adult dogs. They should sleep inside your home during the day, and be kept in an enclosed space if allowed out at night. They are quiet during the day, but bark at night. They must be properly introduced and supervised with new adults, children or animals. Their guard instinct makes them view all newcomers as potential threats to their families and property.

Young puppies chew and dig incessantly until they are about three years old. Patience is required during this time. They do not respond to obedience training very well, because they are intelligent and try to make their own choices.

Socialization is the way to develop the best relationship with your Tibetan Mastiff as the puppy becomes part of the family. It is crucial to take the puppy, or adult dog, along with you wherever you go. The dog must always be on a leash for safety of everyone else. Take the dog on errands, to the park, and on walks when it has had the proper vaccinations and is old enough. Keep the dog confined in the car when out. Take the dog to training classes as soon as possible, even though the results may not be good at first. Keep trying. Don’t give up. They are independent, but training is a must. 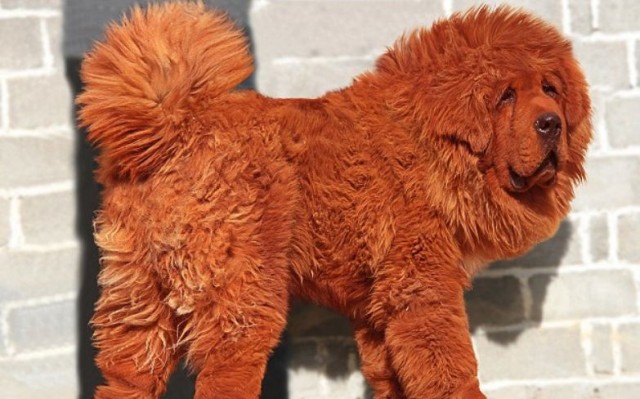 Red Tibetan Mastiff  – The high price paid for the dog (over $1 million) is a sign that the red Tibetan mastiff has become a status symbol in China, replacing jewelry and cars as a way for the super-rich to show off their wealth. Not only is red considered a lucky color, but Tibetan mastiffs are thought to be holy animals, blessing their owners’ health and security. Tibetans believe the dogs have the souls of monks and nuns who were not good enough to be reincarnated as humans or into Shambhala, the heavenly realm.

King George V introduced the breed to England and they were shown at the Crystal Palace show in 1906.

A Tibetan Mastiff competed for the first time in the Westminster Kennel Club Dog Show in 2008.

Tibetan Mastiffs were first recognized as a breed by the American Kennel Club (AKC) in 2007.

The American Tibetan Mastiff Association (ATMA) provides information for breeders and prospective owners, and is the only Tibetan Mastiff Breed Club sanctioned by the AKC. 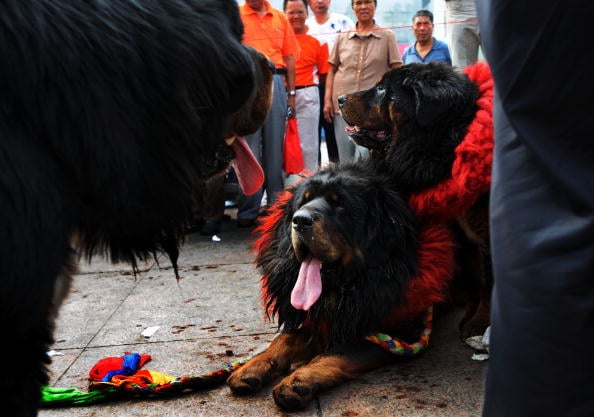 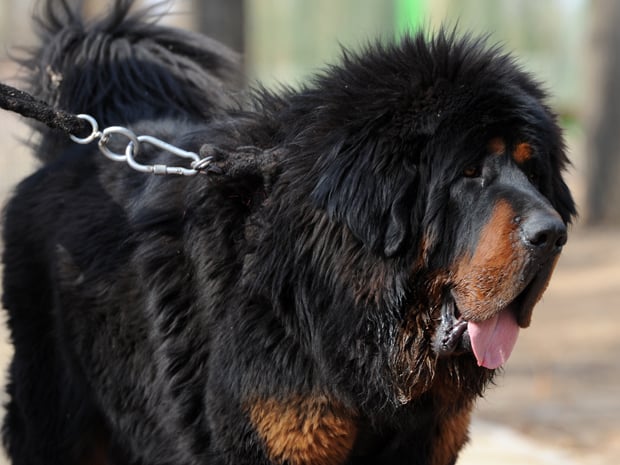