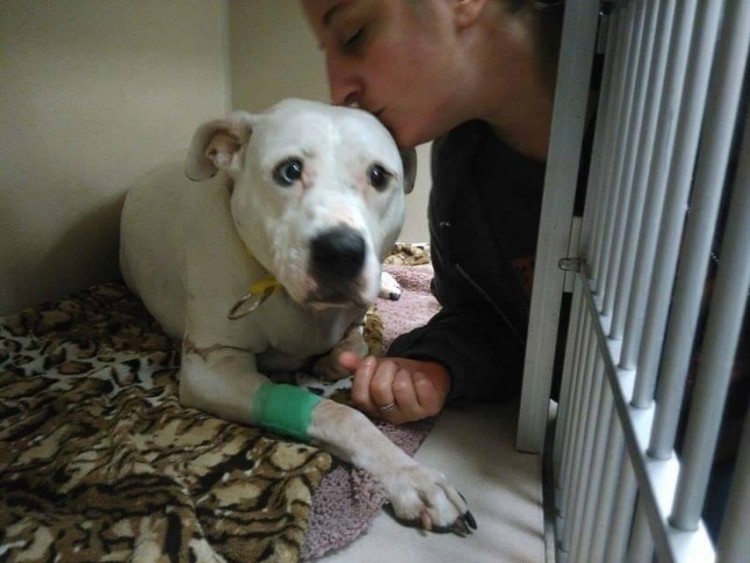 Some dogs with special needs never get adopted, but fortunately for Lady Cherie, she wasn’t one of them. She’s a white lab mix who is missing a paw and was also really frightened of people. Nobody could get close to her and she had obviously been abused. If you have ever adopted an abused animal, you know just how pitiful they are. It just makes you want to cry when you see that terrified look on their little faces when something seems to remind them of that horrible abuse.

Lady Cherie had been found by animal control officers in an apartment complex. She was covered in blood and accompanied by 12 puppies. They were all transported to a shelter, where they would have surely been euthanized had they not been rescued by a local rescue group. All 12 puppies were spayed and neutered when they were old enough. And, then 12 loving families adopted them and gave them good homes. However, due to her many medical issues, poor Lady Cherie wasn’t adopted right away.

Even sadder is the fact that Lady Cherie did get adopted, but the people returned her ten times. How she must’ve suffered from all of that rejection! Her medical issues were one of the main reasons since in addition to all the scars on her body and her missing paw, she was also vision-impaired, deaf, suffering from anxiety, and unfriendly toward other dogs. In addition, she had been suffering from heartworm disease, which had to be treated with expensive heartworm treatment. What she really needed was understanding people who could provide a forever home for her. 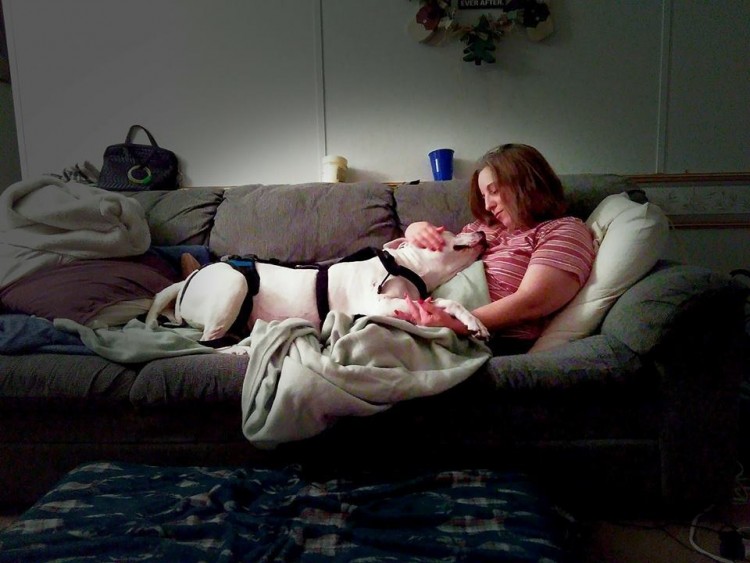 Well, when they went to a San Antonio adoption event, two friends had plans for adopting a black dog. But, once they spotted poor little Lady Cherie, they knew they had to take her home. Renee Bourne and Tyrella Frank saw the sign that read “Experienced handlers only”, but were not put off even a little bit by its message. Instead, they just fell in love with her right off. They only planned on fostering her, however, they realized that they could never let her go once they had spent just one week with her.

Once they got her home, Tyrella and Renee found that they needed to lie down on the floor with her for hours just to gain the disabled dog’s trust. Eventually, though, she crawled up onto Renee’s lap. Now, that was progress! 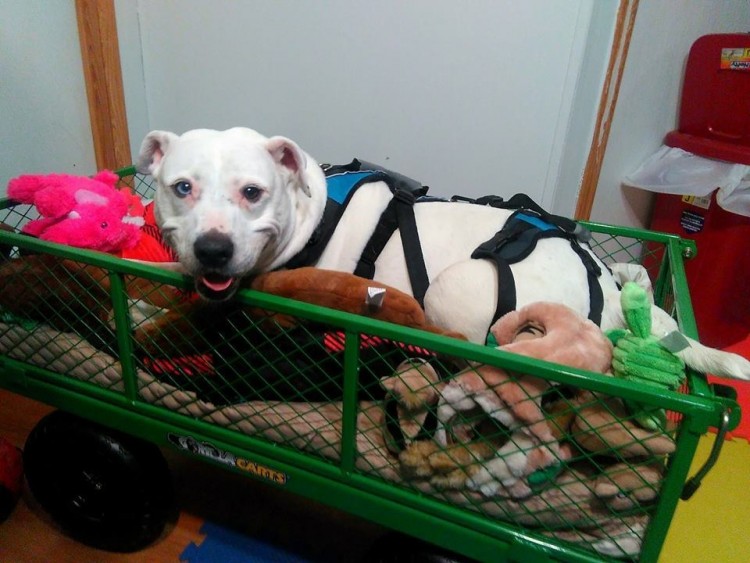 As fast as she was acclimating to her new home and overcoming her anxiety issues, her physical issues were developing, including recurring UTIs, acute pancreatitis, and injured legs. Unfortunately, she became unable to walk anymore and is awaiting surgery for the condition. But, that doesn’t stop Lady Cherie from being the happiest dog in the world. With the help of all the love that she gets and a special wagon from Home Depot to get around in, she’s a very grateful dog. With a soft foam mat, a comforter, toys, and a doggy bed, she feels totally pampered in her little wagon and loves to be pulled around in it. And, with a life filled with car rides and rides in her wagon plus all the love that she can handle, Lady Cherie has forgotten all about her past life filled with pain, abuse, and rejection and is now reveling in her new life with Tyrella and Renee.

Abandoned Puppy With No Front Legs Given Her Own Wheelchair