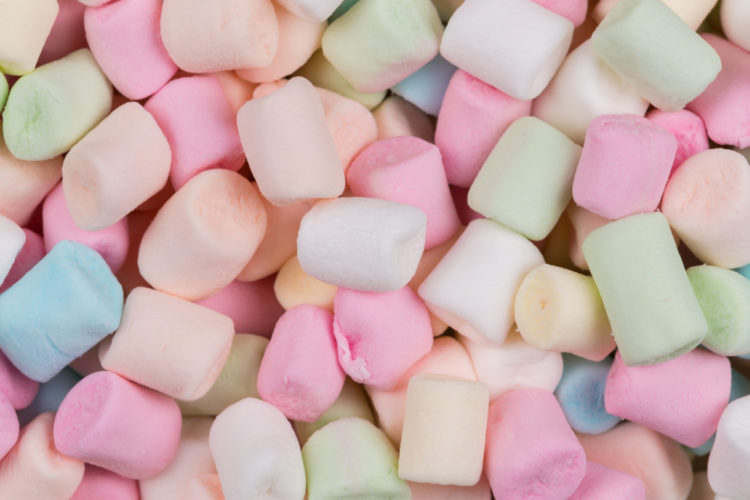 The marshmallow has a very interesting name. This is because the name has been carried over into modern times even though it reflects the confectionary that existed in the past rather than the confectionary that exists in the present. In any case, the marshmallow is named for Althaea officinalis, which might be better-known to interested individuals as the marsh mallow. Once upon a time, the ancient Egyptians boiled the pulped root of the plant until it thickened. After which, the mixture would be strained and then permitted to cool. A wide range of cultures continued to make similar confectionaries. However, it was late 19th century Europe that saw the replacement of the root with gelatin, thus resulting marshmallows made using no marsh mallow whatsoever. Nowadays, these confectionaries are more popular than ever before. For proof, look no further than the fact that the United States consumes more than 90 million pounds of the stuff on an annual basis. Can dogs eat them?

We love our pets. As a result, it is natural for us to wonder whether our pets can eat the things that we love, with an excellent example being marshmallows. Strictly speaking, dogs can eat marshmallows because it isn’t toxic to our canine companions. However, it is important to note that it is a bad idea to feed dogs marshmallows for a number of reasons. For starters, marshmallows offer either no or next-to-no nutritional value for dogs. If anything, they are quite bad for our canine companions because of their high sugar content. Chances are good that interested individuals can guess the effects of dogs eating too much sugar. For example, they can develop tooth problems. Similarly, they can develop obesity, which will increase their chances of developing diabetes as well as a wide range of other serious medical problems. Dog owners will want to avoid these issues as much as possible because of the negative effect on their dogs as well as their wallets. After all, medical treatment is always expensive.

Surprisingly, sugar-free marshmallows can be even worse for dogs than their standard counterparts. This is because they often contain artificial sweeteners that taste sweet but will pass through human systems without being digested. Some of these substances are harmless for dogs. Others are the exact opposite. In particular, interested individuals should watch out for xylitol, which is extremely dangerous for our canine companions even in small quantities. Death is very much a possible outcome. However, so is lasting damage to the liver. Due to this, if a dog owner knows that their dog has eaten marshmallows made using xylitol, they need to bring their dog to their veterinarian as soon as possible. Faster intervention can make for a better outcome. As such, speed is critical. Besides that, interested individuals might want to seek out medical assistance for their dogs even if the latter have eaten standard marshmallows and nothing but standard marshmallows. Those shouldn’t be toxic for them. Unfortunately, eating too many marshmallows is apparently capable of causing gastrointestinal issues for dogs, which can still be quite bad.

What Are Some Snacks That Would Be Better For Dogs?

Here are some examples of snacks that would be better for dogs:

Dogs can eat corn without issue. However, interested individuals should make sure to serve the corn on its own. This is because dogs won’t handle either the cob or the husk very well. Those things can be choking hazards. Furthermore, those things can create blockages in dogs’ digestive systems.

Eggs are an excellent source of protein. If dog owners want to serve eggs to their dogs, they should make sure to cook those eggs thoroughly. This is important because uncooked or undercooked egg whites can cause a biotin deficiency, which won’t be very pleasant to say the least. As for the eggshells, that is a bit more complicated. On the one hand, they contain calcium, which can be beneficial for dogs; on the other hand, they are a very inconvenient source of calcium, meaning that interested individuals might want to look into other options. Dogs’ digestive systems aren’t very good at digesting eggshells. As a result, interested individuals will need to grind up the eggshells before putting the powdered results on the dogs’ food. This is particularly important because the broken pieces of eggshells can be quite sharp, which aren’t the kind of thing that should come anywhere close to soft tissues. If people are concerned that their dogs aren’t getting enough calcium, they might want to ask their veterinarians about better alternatives.

Peanut butter can be very beneficial for dogs. After all, it provides plenty of protein. Furthermore, peanut butter contains other important nutrients such as niacin, vitamin B, and vitamin E. Having said that, there are a number of things that interested individuals should keep in mind. One, dogs should eat peanut butter in moderation because too much fat can lead to pancreas problems as well as other health issues. Two, raw, unsalted peanut butter is the best kind of peanut butter for our canine companions. Three, there are some kinds of peanut butter that contain xylitol, which should be avoided for the reasons that have been stated above.

Shrimp can be eaten by dogs. However, people will need to prepare them the right way. This means cooking the shrimp thoroughly, which should prevent parasites as well as other potential complications. Furthermore, this means removing the head, the tail, and the legs. Dogs can eat those parts of the shrimp. The issue is that those things can be choking hazards, meaning that it is best to remove them rather than run the risk.

Yogurt is fine for dogs that are capable of digesting lactose. Of course, certain kinds of yogurt are much better than others. For example, people should avoid yogurt with fruit. This is because dogs can eat certain kinds of fruit but not others. Something like grape yogurt would be very bad for dogs. Instead, interested individuals should go for a small amount of plain yogurt, particularly since other yogurts can contain too much sugar. Yogurt with live active cultures might be beneficial as well, both because they contain less lactose and because they are good for gut health.