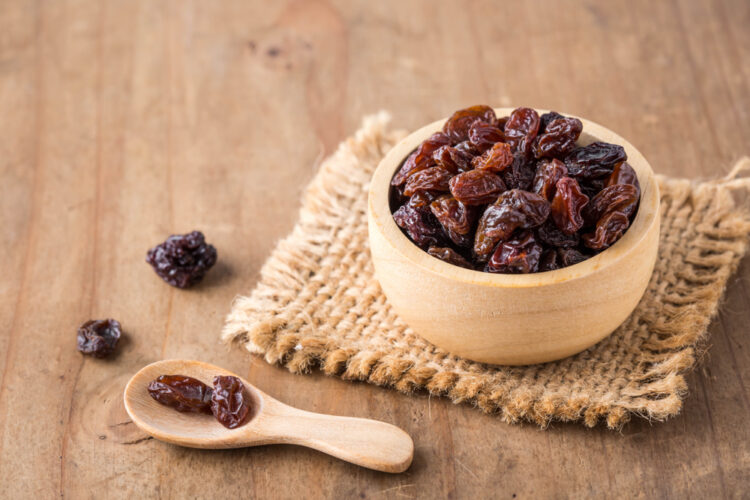 Raisins have been produced since ancient times. Generally speaking, the term refers to every kind of dried grape. However, there are places where raisin specifically refers to the dried versions of large, dark-colored grapes while other terms refer to the dried versions of other kinds of grapes. In any case, the production of raisins isn’t as simple as just leaving grapes out in the sun. This is because these berries have multiple adaptations that are meant to prevent water loss, with an excellent example being the wax in their skin that makes it difficult for water to move from their interior to their exterior where it can be evaporated. As a result, grapes need pre-treatment to increase their rate of water loss. After which, they can be dried using either the sun or some other method, each of which comes with its own particular combination of pros and cons. Faster water loss makes for more desirable raisins. Something that tends to be very important for the consumers.

Dogs and dog owners are not the same. Due to that, what is edible for a dog might not be edible for a dog owner and vice versa. This is very important because grapes are very toxic for dogs. It isn’t clear why this is the case. However, the more relevant part is that eating even a single grape has been known to kill dogs. As such, dog owners need to make sure that their dogs avoid any grapes and grape-related products, with raisins being no exception to this rule. If anything, raisins might come with extra complications. This is because sulfur dioxide is sometimes used after the pre-treatment to decrease the browning, the loss of flavor, and the loss of certain vitamins during the drying process. Unfortunately, the consumption of said preservative has been known to lead to thiamine deficiency in dogs. There are a number of potential symptoms that can show up when a dog has been poisoned by grapes. For example, they might start suffering from vomiting and diarrhea. Similarly, they might show lethargy, weakness, and a loss of appetite. On top of this, said animal can expect kidney problems, which can result in outright kidney failure. Whatever the case, if the dog owner knows that their dog has eaten a grape, they should contact their veterinarian for emergency assistance because this is something that absolutely cannot be put off.

Candy can be surprisingly dangerous for dogs. However, the exact nature of the danger can be different for different kinds of candies. For example, dogs might swallow chewy candies without chewing them enough, thus creating the potential for choking as well as blockages in their digestive systems. In contrast, hard candies have been known to fracture dogs’ teeth.

Generally speaking, dogs shouldn’t eating any nuts in great quantities. They contain a lot of fat as well as a lot of calories, meaning that they can cause a wide range of serious medical issues. Having said that, some nuts are much worse than others because some nuts are just straight-up toxic for dogs. Macadamia nuts are an excellent example. Like grapes, it isn’t clear what is causing the problem. However, it is very clear that it causes a problem. Weakness is a very common symptom for dogs that eat macadamia nuts. Moreover, it is possible for dogs to become incapable of standing up thanks to the paralysis of their hind limbs while exhibiting other symptoms such as tremors, joint pain, and abdominal pain.

Onions do damage to a dog’s red blood cells. Considering that dogs need their red blood cells to transport oxygen to every single part of their body, it should come as no surprise to learn that this makes these bulbs very dangerous to them. Due to that, dogs should avoid eating onions, anything made using onions, and anything flavored using onions. Be warned that this problem isn’t limited to onions. Instead, every single species in the genus Allium should be avoided for the same reason, which is a huge issue when those include but are not limited to garlic, leeks, and chives.

Yeast causes dough to rise. Thanks to that, it is very dangerous for dogs to consume raw yeast dough. After all, the yeast can cause the dough to rise in the dog’s stomach, thus causing pain and discomfort. Even worse, bloating can lead to the dog’s stomach twisting, which is a serious medical problem that will need emergency treatment. Besides this, the yeast can generate alcohol during the fermentation process, which is another thing that dogs need to avoid.

As mentioned earlier, the stimulant caffeine can cause problems for dogs. Since tea leaves contain caffeine, that makes tea and tea leaves off-limits for dogs as well. Generally speaking, dogs shouldn’t show much interest in these things. Still, it is a good idea to use safe storage practices for them anyway.

Xylitol is an artificial sweetener. As a result, it sees use in a wide range of foods and beverages that are supposed to taste sweet without using sugar. Unfortunately, xylitol is quite dangerous for dogs because it can cause seizures, liver problems, and low blood sugar in them. If something contains xylitol, it should be considered off-limits for dogs because consuming it can kill them.