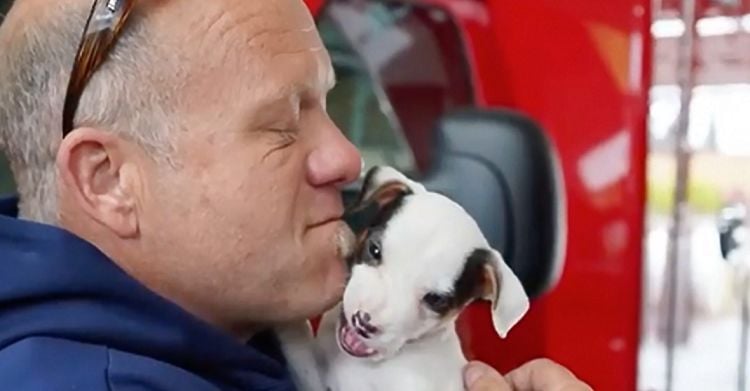 When you hear of a firefighter, putting out fires immediately springs to mind. However, when a firefighter adopts a Pit Bull puppy rescued from Sacramento homeless fire, he proves that firefighters do more than extinguish fires. As Rev. Dr. Cynthia Huling Hummel once said, firefighting is a science and a passion, and the firefighters do whatever they do because they love their work. They are a godsend, saving animals and giving them forever homes. The story of how Mike Thawley adopted a puppy he rescued is so moving, and you can read more about it here.

A Calling to Save

Thawley works for the Sacramento Fire Department, and on April 12, 2022, the crew was called to North Sacramento, where there was a fire under the Interstate 80 bridge. According to Daily Paws, the firefighters had to put out the fire and rescue one puppy found around the scene. The Pit Bull puppy had a lot of burned plastic on the top of his head and his back. He also had a small patch of burns on his hind legs. After the firefighters made the rescue, the Captain at Station 19 called Thawley, asking him if he would be interested in looking after the injured puppy. Of course, the pet lover agreed to the noble duty of fostering the puppy while Front Street Animal Shelter looked for a permanent home for him. The Captain immediately thought of Thawley to foster the rescued Pit Bull because almost six years ago, the firefighter had fostered another rescued puppy.

According to The Dodo, in 2016, Thawley found a puppy bound to a fence by the side of the road on Richards Boulevard. On closer inspection, he noticed the puppy was neglected due to the evidence of mange, a skin disease caused by mites burying themselves into the skin and feeding on it. The dog had been rained on so Thawley took her to the station to dry her off before taking her to Front Street Animal Shelter. He kept visiting her and eventually adopted her. Thawley named her Chunk and documented the journey on social media, where the dog garnered millions of followers. Therefore, the Captain knew that Thawley would take good care of the injured Pit Bull puppy. The firefighter bathed the dog, fed him, and picked out the plastic. The dog sensed he was in good hands and started wagging his tail the following day. After fostering the rescue, Thawley and his family were ready to adopt him, and on April 26, the name “Loki” came to him, naming the puppy after the Norwegian God of Fire. Thawley said that Pit Bulls are misunderstood, yet they are one of the most family-friendly breeds hence his devotion to advocating for them.

Other Firefighters Who Gave Their Rescues a Home

The story of Thawley adopting a puppy he rescued is one of many that keep restoring faith in humanity, specifically in firefighters. Other firefighters have shown love to animals by taking in those they rescued. Malcolm Cortner, according to People, responded to a call about an apartment on fire in Des Moines in September 2021. Immediately after he and his colleagues arrived at the scene, they saw a mastiff in the burning building. Cortner got him out to safety, where emergency administered oxygen to the canine. The dog had been injured so much that he needed costly treatment that the dog owner could not afford. Therefore, the dog owner opted to have the dog euthanized, but Cortner would not bear it.

Consequently, the firefighter adopted the dog, whom he named George, and paid for the expensive treatment required. On March 30, 2019, Captain Paul Bryant of the North Charleston Fire Department responded to a call from a family who were out riding bikes in the woods when they found a puppy trapped under some rocks. The Captain rescued the dog, who showed his gratitude with lots of kisses. Unfortunately, he was not microchipped and thus was taken to Charleston Animal Society which put him up for adoption. Bryant followed up on the dog, and upon finding out that the canine was yet to find a permanent home, the Captain decided to adopt him. After all, fate had conspired to bring them together, seeing that the Captain’s family had lost their dog three years ago and were ready to adopt another one. Bryant named the rescue “Rocky.”

Effects of Smoke Inhalation in Dogs

Thawley and his colleagues saved Loki in time. Although he had already sustained injuries from the burned plastic on his body, it could have been worse. According to Pet Poison Helpline, pets are poisoned during house fires because they usually cannot find a means to escape. Therefore, they hide in the burning building and continue to inhale the poisonous gases such as carbon dioxide, carbon monoxide, and cyanide, all of which can cause severe lung damage. Carbon monoxide interferes with the body’s ability to deliver oxygen to tissues and organs. It can result in brain hypoxia which presents itself as seizures or a dog going into a coma. When plastic burns, it releases hydrogen cyanide which has the same effects as carbon monoxide. There could also be other materials within a building causing chemical irritation when there is a fire, and the heat can also cause thermal injury. In the case of Loki, he showed direct burns and was lucky enough not to have suffered any secondary damage. Smoke inhalation causes coughing, breathing difficulty, burns in the mouth, nose, or upper airway, and increased breathing rate. Dogs may squint due to irritation in the eyes; the eyes may also develop inflammation and conjunctivitis. The extent of damage can only be ascertained through a few tests. X-rays show how much the lung has been damaged. A pulse oximeter assesses the blood’s oxygenation levels, and an ECG checks the dog’s heart rhythm and rate. 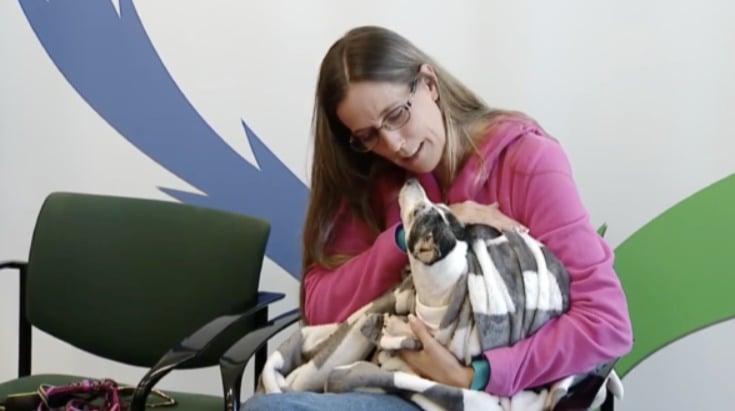 A dog going missing is not all that uncommon. They can become disorientated while out on a run with their owner, get off their leash, or slip out of a door that has accidentally been… 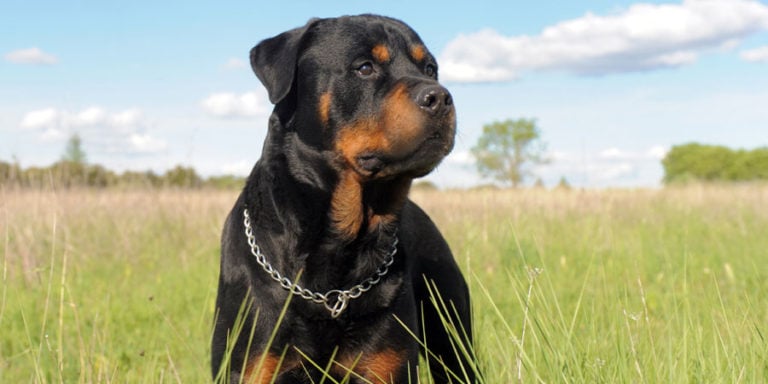 Names have very powerful meaning, both for humans and animals. And for big breeds of dogs, having a powerful name is important to a lot of owners. Rottweilers are a large breed of dog that… On her first search of a dilapidated apartment building in St. Louis, Missouri, Donna Lochmann, Chief Life Saving Officer of Stray Rescue of St. Louis (SRSL), was unable to locate the dog that had been… 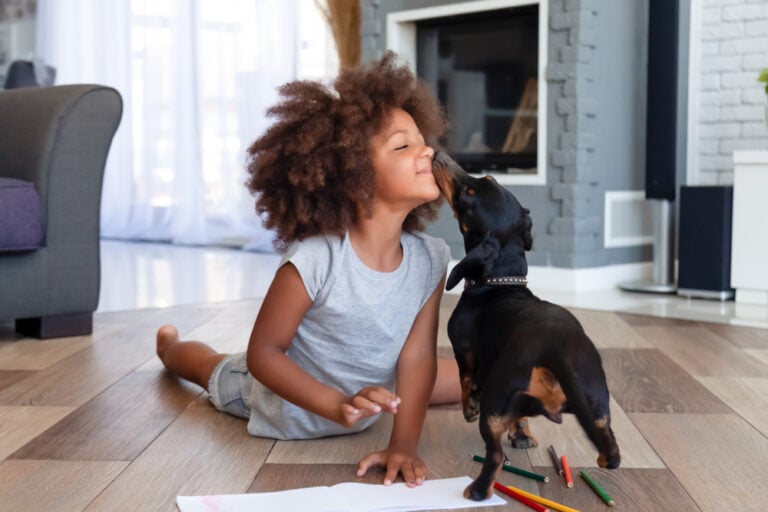 There are many reasons why a dog can end up in an animal shelter, and the length of their stay depends on many factors. For some pets, the time they spend at a rescue facility… 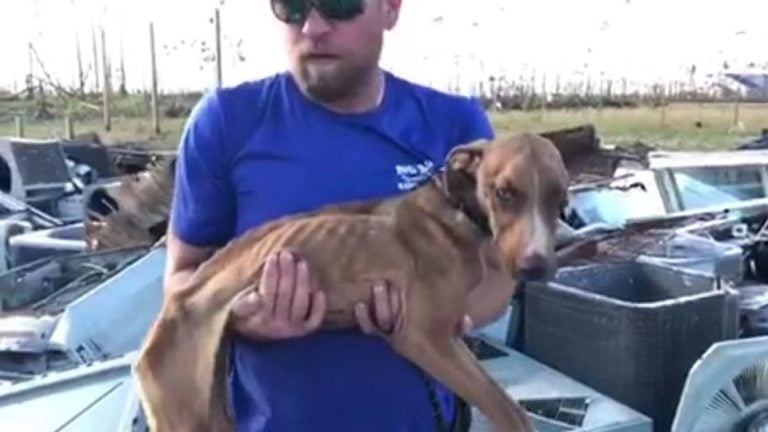 A dog that was rescued in the Bahamas, three weeks after Hurricane Dorian hit, has been aptly named Miracle by the people who rescued him. He was found under some rubble where it was believed…