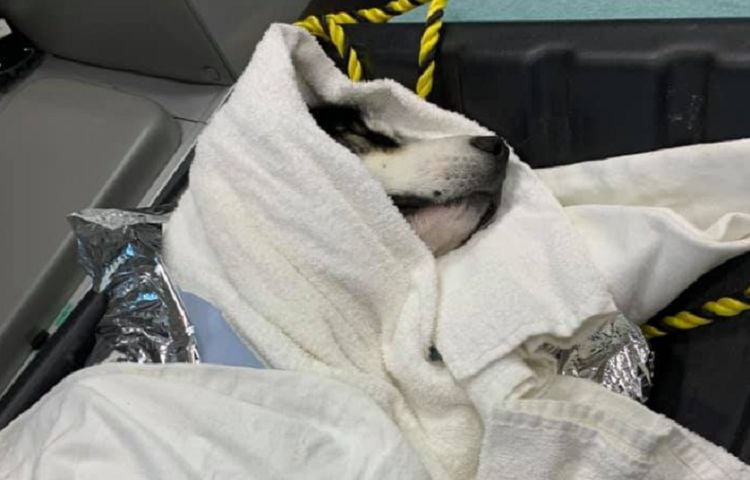 It is funny how sometimes people act exactly like the person they were named after, yet some still believe there is nothing more to a name. One mischievous dog, named Loki after the god of mischief and mayhem, helps settle this matter by living up to his name. Firefighters braved chilly waters to rescue the dog from an icy river after falling through the ice while playing with his brother, Thor. Here is the full story of the rescue, as you also get to learn about how safe it is for your dog to swim in or consume cold water.

Saved in the Nick of Time

Loki and Thor were playing when Thor went running out, so Loki followed him. Unfortunately, the ice broke, causing Loki to fall into the Thunder Bay River’s icy waters. According to Michigan Live, the incident happened on January 8, 2021. The Alpena Fire City Department was called in to rescue the dog. Luckily, it was an emergency they had been trained for; the firefighters train each season for such incidences to enable them to improve their proficiency.

The dog had been fighting for his life by the time the firefighters, Chris Morrison and his partner Michael Sanders, arrived. Morrison was dressed in a mustang suit and was attached by rope to Sanders. Morrison broke a path on the ice to the dog and swam towards Loki. The moment Morrison got hold of Loki, the dog went limp from exhaustion. The firefighter then cradled Loki in his arms and took him to the riverbank where an ambulance was waiting. They wrapped the dog in a hypothermia blanket and swaddled him with towels before taking him to the Switzer Veterinary Clinic for further examination. It seems like Loki’s health was not in danger because reports say that he and his brother have since been reunited with their owners.

Not all Heroes work in Fire Departments

In a similar incident, an experienced cold-water swimmer being at the right place and at the right time helped save another dog’s life. Darcy Pell was on a run with his friend when he spotted a dog struggling to stay alive in the icy waters at Pontefract Park. The woman who took the video of Pell saving the dog said she had tried to rescue the canine but had not seen any lifebuoy. When Pell saw the drowning dog, he sprang into action by lowering his body into the freezing water, grabbing the dog, and swimming to the lake edge to hand him over to the owners.

While others applauded Pell as a hero, the humble man only said that he saw a dog in need and did what he could. He explained that he knows the dangers of swimming in freezing water and would not advise anyone to do what he did. However, he had the guts because he swims in cold water as a hobby. He is so used to the cold water that after rescuing the dog, he borrowed a jacket from his friend, and they continued with their run.

Should Your Dog Swim in Cold Water?

With the incident of Loki almost dying, any dog owner should be wary about how much time the furry friend spends in cold water. According to Pathway Pooch, the amount of time is dependent on a few factors, such as the breed with double-coated breeds being at an advantage over those with thin coats. The size of a dog also plays a huge role. The smaller the dog, the more the sensitivity to temperature change. Also, one should consider the fitness of a dog because some conditions inhibit a dog’s ability to regulate body temperature.

Usually, temperatures above 7 degrees Celsius are safe for most dog breeds, while those below -6 degrees Celsius can cause frostbite. However, thin-coated dog breeds feel cold faster; thus, at 0 degrees Celsius, they may start experiencing hypothermia. Still, that does not mean you have to carry a thermometer around every time you want to take your dog for a swim. Generally, if you feel it is too cold to swim, then it is for your dog.

Regardless of how thick the dog’s fur is, ten minutes at most is the recommended time for a swim in cold water. You can ensure they make use of those ten minutes by keeping the dogs as close to the edge as possible. That way, you prevent them from submerging. You could also invest in a swim suit for dogs, but only if it does not restrict the dog’s ability to swim. You can also reduce the possibility of compromising the dog’s health by keeping a warm towel at hand so that immediately your furry friend is out of the water, he keeps warm.

What about Consuming Ice-Cold Water?

Swimming in cold water can cause hypothermia, but what are the dangers if your dog drinks icy water? According to Snopes, giving your furry friend ice cold drinking water will cause bloating that could result in a life-threatening condition called acute gastric dilatation-volvulus(GDV). The condition leads to gas accumulation, and its fatality rate ranges between 10 and 60%. GDV mostly occurs in older and giant dog breeds, but early diagnosis and treatment can reduce the fatality rate.

However, another source gives a contradicting statement regarding GDV development. According to Dog Health, drinking cold water is not what results in GDV; instead, the condition only results from drinking cold water fast, causing too much air to be swallowed. Therefore, you can give your canine cold water on a hot day but ensure that he drinks it slowly. Afterward, he should not be too playful for at least an hour because he could swallow air even then. Other scientists argue that cold water on a hot day will be counterproductive because it leads to blood vessel vasoconstriction. Consequently, the heat exchange between air and the superficial blood vessel is inhibited.