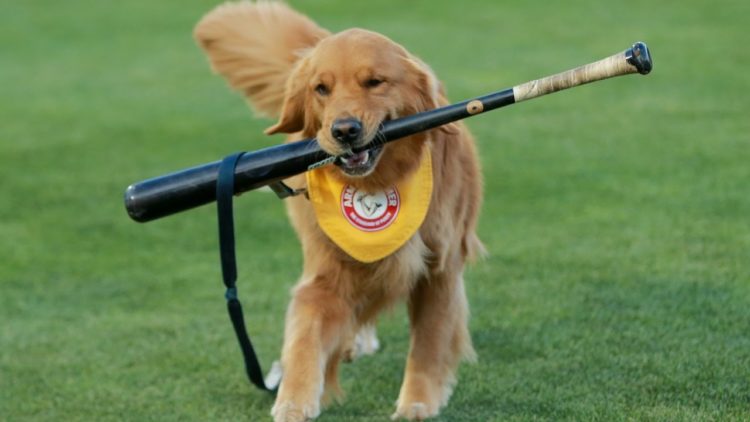 Have you ever heard of a bat dog? No, this isn’t a situation where Batman decided to get a pet. Instead, a bat dog is a very real thing that most minor league baseball teams employ. The dogs are trained to do exactly what it sounds like, deal with the bats. More specifically, they’re trained to pick up bats that players drop when they run to base. Otherwise, there would be bats flying all over the place that people could trip over, step on, and ultimately create a lot of chaos with.

If you’re wondering why human beings aren’t employed to do this, it’s probably because people identify with dogs much more readily than they do with other people. Most sporting teams, whether professional, minor league or college, have some type of mascot. For baseball, it’s become something of a tradition to have a bat dog on these teams. The dog serves not only as the team’s mascot, but also performs the practical function of picking up the bats.

At the end of the day, everybody seems to be happier with the idea of allowing dogs to continue on in this role. After all, most fans are just as excited to see the dog as they are the players, if not more so. The dogs can be entertaining, especially when they are independent enough to think for themselves. Sometimes, it’s downright comical to watch the team’s bat dog try to wrestle a bat away from a player who laid the bat down too soon or did something else to make the dog think it was time to come retrieve it. It gives the audience a good laugh and you can bet that if there’s only one thing that most of them will remember from the entire day, it’s something that the dog did.

The great thing about the life of a bat dog is that most of these animals are rescues from the local shelters. They’re extremely well-trained and they’re well taken care of. These are dogs that have a specific caretaker and trainer and at the same time, most of the people on the team have some type of relationship with the dog. In addition, the bat dog is given a job, retrieving the bats. This makes the dog happy because he or she has something to do, it saves the team money because they’re not paying a human being to go out and retrieve the bats, and it endears the team to the audience. All in all, it’s a system that works.

Chances are, you’ve probably wondered what really happens to all those bets when the player drops it and takes off running. If you’re paying attention, you might have seen a bat dog or two in action. The truly remarkable thing about them is that for some individuals, the dogs are the things that turn them into baseball fans in the first place. If you’ve ever been to a game with someone that really just went along because someone else wanted to go, the chance to see the dog might have turned them into a fan of the team themselves. It happens all the time.

You can bet that training a dog to perform this task can sometimes be a challenge. It really depends on the dog in question. Some of them have a tendency to pick up on it just as if they’ve been born to do it and others take a little bit longer to catch on. Of course, there is always one or two that knows exactly what you’re asking them to do, yet have something else in mind. Either way, most of the dogs eventually come around and once they do, they have a remarkable tendency to do their job with uncanny consistency.

There is no doubt that the role of the bat dog makes the entire game a lot more interesting. Whether you love baseball or you’re just sort of lukewarm to the entire idea of going to a game, who doesn’t fall in love with the bat dog? One thing is certain, it’s probably one of the more interesting jobs that any dog has ever had, not to mention one that had found itself sitting in a little cage with a concrete floor in the not-too-distant past.