When people talk about police dogs, you will probably have images of dogs bringing down criminals or sniffing out bombs or drugs. Yet, there are lots of different roles for dogs that support the police, and one type of dog they use is therapy dogs. These are useful in supporting victims in many situations. According to the Los Angeles Times, there are now three dogs working with the police department in Corona that have a very different role from other police dogs. They are there to support people who have witnessed tragedy, victims of crime, and survivors of trauma. Public safety dispatcher Erin Lennox says that dogs have the ability to help people in a way that humans often can’t.

Therapy dogs have become widely used in a variety of services, including hospitals and educational settings. However, the concept of using therapy dogs in law enforcement is relatively new, although the numbers are growing as people recognize the invaluable role that therapy dogs can play. Many of the dogs come from an organization called Canine Companions for Independence. This non-profit organization was founded in 1975 and originally trained companion dogs for veterans and disabled children. They now train therapy dogs for a variety of purposes. Now, this organization has put a total of 19 dogs into police stations across southern California.

A nine-year-old golden retriever called Scottie was the first police facility dog in California, and one of the first across the United States. He first began working in this role in 2012 when he was placed with the Hawthorne Police Department. Since then, he has supported victims in many ways.  One particularly difficult situation was a shooting in April 2019. Outside the police station, a child-custody exchange was taking place when the mother was horrifically shot in front of her baby. The role that Scottie played was to sleep beside the baby, who was kept in the police station overnight in a room that was filled with stuffed toys and books.

Scottie’s handler, Officer Lameka Bell, said that Scottie played an important role in providing comfort in this situation and that it was wonderful to see. Despite the important role he now plays, many officers were dubious when police facility dogs were first introduced. Even Bell was initially concerned that the police station wasn’t the place for lovely, happy animals. However, Scottie soon proved himself as a valuable member of the force. Some days for Bell and Scottie are quite enjoyable. They visit every department in the police station each morning where Scottie is greeted warmly by everyone who works there. They then might do a couple of community outreach events, such as visits to schools and hospitals.

Unfortunately, not all days are so relaxed and happy. Some days, Scottie’s role is to sit with children who are victims of abuse while the police gather evidence and take photographs of their injuries. On other days, he may provide comfort and support for women who are victims of rape and must endure the experience of the rape kit procedure. Scottie and Bell often work at the YWCA and work the hotline. When a rape victim rings in for support, Scottie and Bell arrange to meet them at the rape center where the woman is given the therapy dog’s leash to hold while she is examined by a doctor. 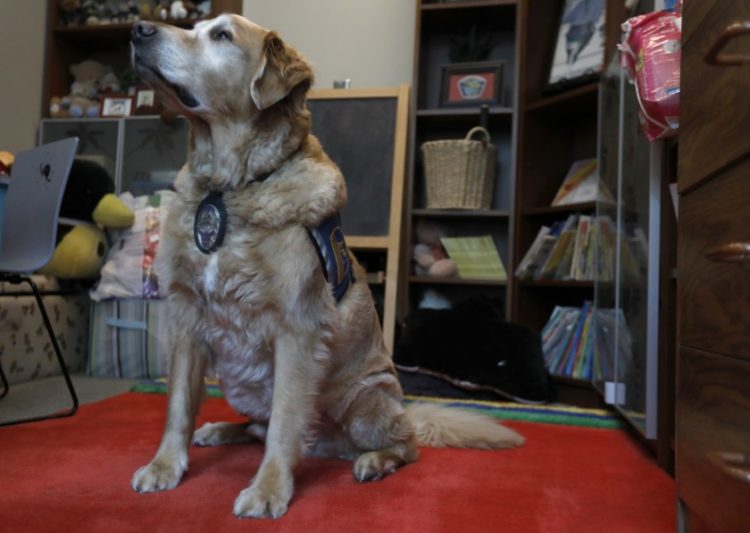 Bell has described how once the police have applied for a therapy dog, it can take more than a year for them to receive a dog. This is because the organization must ensure that the dogs have the right temperament before they undergo a rigorous training schedule. Once they begin working with the police force, they live with their handlers so that they have plenty of affection and playtime. Of course, spending so much time together means that a police facility dog and their handler establish a unique bond. Bell has said that she always knows exactly how Scottie is feeling and when he has had enough for the day because she has learned to recognize his body language.

One of the most recent additions to the team is Raider, who joined the police force in 2018. He has already assisted on some tough cases. One of the most significant of these was the support he offered in the case of 13 children who had been abused by their parents. Throughout the case, the three-year-old yellow Labrador offered support both in and out of the courtroom.

At the time that David and Louise Turpin were arrested on more than a dozen counts of felony, their children ranged in age from two to 29. In April 2019, the couple pleaded guilty to the charges and were sentenced to 25 years to life in prison each. Throughout the sentencing, Raider sat with the children to offer them comfort.  One of Raider’s handlers is Adam Roulston. He has explained that the handlers are the ones who decide where it is best to take the dog and in which cases they are most needed. However, he also points out that it is the dog who decides which person they should approach.

This shows that the dogs can perceive who needs the support the most at that point. While the police officers generally focus on the primary victim of a crime, raider often walks over to the person who is suffering from secondary trauma and is also needing some attention.  Another dog who works in the department is three-year-old yellow Labrador Meredith, whose role is predominantly to support teenagers who have faced traumas. She spends a lot of her time at Redondo Beach High School along with her handler, Sharon Rose.  According to Rose, the students were initially concerned that Meredith was there to monitor their behavior in some way. However, trust has now been established as they know that this is not the case.

Now students often stop by if they need a little support during a stressful time. Meredith has also supported many grieving students. One example of this is when there was a mass shooting at the nearby Borderline Bar and grill, which impacted many of the students.  These examples show the invaluable role that police facility dogs are playing within the police force and how they can benefit communities. It is likely that police facility dogs will have a greater presence in the force in the future as their importance is now recognized.