“You see, not all disabilities are visible.” It is hard to imagine these days the level of cruelty people can stoop to. The short version of this story is that Jenn Bethune was walking with her service dog at Disney World when a thoughtless person told her child that Jenn didn’t have a real disability, and that the service dog was basically a prop. Little did the person know that Jenn was suffering from PTSD that is directly related to her visiting Disney World. So Jenn took to Facebook to post a response, which has been shared more than 75,000 times.

What might be a lesson in basic decency can be learned by comparing the actions of Jenn’s service dog, Teddy, with that of the thoughtless person. Teddy was indifferent to the stupid comment made by the person and proceeded to do his job; what he was trained for. The person on the other hand was meddling into someone else’s business without even knowing about Jenn and her situation. The fact is that had the person known about the purpose of Teddy she would have been more compassionate and less judgmental. Maybe.

By the way, dogs tend not to be judgmental. Most are willing to approach people even though they are complete strangers (unless trained otherwise). They are open and willing to give everyone a chance until that initial trust is betrayed. They don’t judge by sight or their perception of the person. This is not to say that this natural instinct has betrayed some dogs, but as a general rule most people can be expected to treat a dog humanely. 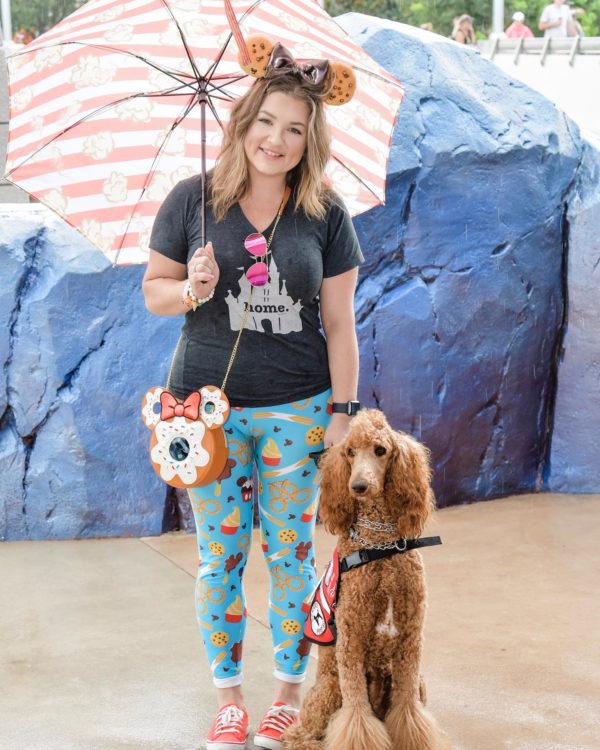 The person in this article has demonstrated they are suspicious and perhaps even socially maladjusted, as their tolerance of other people and their particular situation is obviously limited. In contrast, dogs are social creatures and love to play and romp with other dogs when given the opportunity. There is an increasing trend by local municipalities to create dog parks where dogs can roam free without a leash in predefined spaces. Disney Word is supposed to be that type of environment for people, but apparently going to simply have fun is passé.

Returning to Jenn’s quote at the beginning of the article, dogs do not discriminate on the basis of disability – seen or unseen. What makes dogs perfect as service animals is they are low maintenance when it comes to knowing their duties. They are faithful companions, and in Jenn’s case, make life a lot easier to live. Teddy apparently was wearing a sign that indicated he was a service dog, which prompted the response from the thoughtless person.

There is actually a web site, Share America, that is run by the government that devotes itself to keeping people informed about the many uses and functions of a service dog. One of the examples is a dog that senses when a woman’s blood sugar level is low because she is diabetic. Talk about things unseen. The total number of service dogs currently in use is estimated to be more than 500,000 – and growing. Not every dog can be trained to be a service dog, so there is a vetting process that ensures the dog can fulfill its duties.

One thing worth mentioning is that an actual service dog will have a sign that indicates it is indeed a service dog. For the uninformed, it can take as long as two and a half years to prepare a dog for service. While the media often reports the connection between service dog owner and service dog, it is only a passing note the requirements and training necessary. One question that can be asked is why a person would choose to fake the service dog label?

When all is said and done, it seems we all can learn some lessons about our personal behavior and conduct from watching dogs interact with people and other dogs. Service dogs are committed to doing their jobs regardless of how old they are. In general, dogs remain loyal and faithful until the end. Though there are some dogs who are known to run away from home when they know their time is up, most patiently await their owner to show them the door. No small number of dogs take that final car ride with their head hanging out the window, enjoying the smell of freedom one last time.

Most dogs will obey their master’s voice even if they have not been formally trained. No arguing or fighting (except maybe when it’s time for that b-a-t-h). There was one dog that was informally trained to be wherever “mom” was. Find the dog, you find mom. He made sure that was true even when she went to the bathroom. At night, he would lie at the foot of the bed and wait until she was sleeping, then return to his assigned corner to stand watch over the house.

As a general rule, most dogs will be glad to see their own kind. They don’t discriminate between breeds, weight, height, or who their owner is or isn’t. They’re simply happy to be around someone who has a like mind set. Even when a fence or other geographical boundary separates them from one-on-one contact, the friendly sniffing and bark lets the other know that everything is fine.

Dogs who have physical or mental disabilities are treated the same by everyone, people and other dogs, because there is a sense of compassion that goes with the territory. People, for some unknown reason, see anything that is different from the norm as odd or even repulsive. It shouldn’t surprise anyone why dogs are the animal of choice to help people with physical or psychological disabilities. Beyond their loyalty, there are many times they show themselves as being smarter than the people they encounter every day. Or maybe it just seems that way.