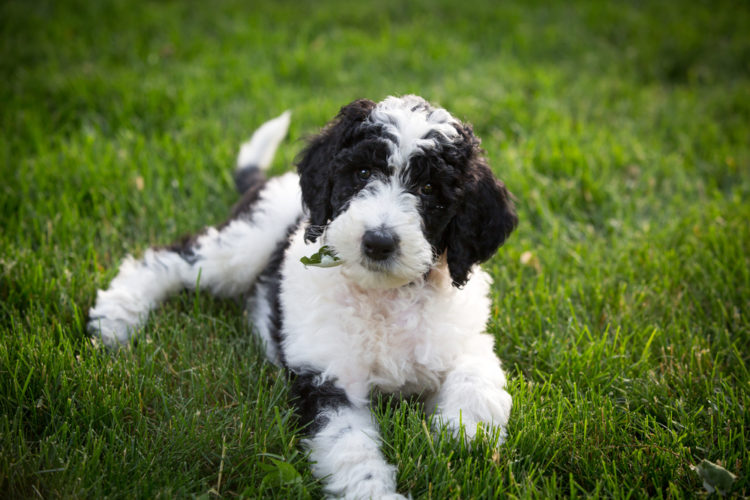 The Sheepadoodle is the product of a union between an Old English Sheepdog and a Poodle. As a result, these dogs have a very lovable appearance. However, interested individuals should know that Sheepadoodles come with some serious demands on their time, meaning that these dogs aren’t well-suited for everyone even though these dogs possess a lot of selling points.

Chances are good that interested individuals can guess that the Sheepadoodle is a designer dog. This means that it was crossbred from two purebred dogs for the purpose of creating a dog that has inherited the best characteristics from both sides of its heritage. Designer dogs can be differentiated from other mixed-breed dogs by their intentional creation, which is something that has become popular in recent decades.

It is common for designer dogs to have multiple names. After all, they aren’t as regulated as their purebred counterparts, meaning that some divergence is to be expected. Fortunately, designer dogs also tend to have names to make it very easy to figure out what purebred dogs they are descended from, which makes sense because those names play an important role in their marketing. Examples of the Sheepadoodle’s other names include Sheepadoo, Sheepapoo, and Sheepoodle.

If people are interested in getting a Sheepadoodle, they need to know whether they are getting a first-generation mix or a multi-generation mix. This is important because designer dogs are unpredictable combinations of characteristics from both sides of their heritage. However, it is possible to make them more similar to one side of their heritage than the other, which is to say, by making them descended more from one side of their heritage than the other. This can be very useful for people who want particular characteristics in their Sheepadoodle, though this still guarantees nothing.

4. On the Bigger Side of Things

Poodles come in a wide range of sizes. However, Old English Sheepdogs tend to be on the bigger side of things. As such, considering the process by which Sheepadoodles come into existence, it should come as no surprise to learn that these dogs are on the bigger side of things as well. There are sources that claim that Sheepadoodles reach a height of 18 to 27 inches, with the result that they reach a weight of 65 to 85 pounds. Those numbers are far from matching those of the biggest dog breeds that can be found out there, but they are still impressive in their own right.

Curiously, there are sources that claim that Sheepadoodles have a lifespan of 12 to 15 years, which can be considered decent when dogs have a lifespan of 10 to 13 years. Generally speaking, bigger dog breeds are supposed to be shorter-lived because they seem to age faster. However, the matter of expected lifespans is complicated, meaning that they aren’t determined by just a single factor. As such, these claims aren’t that unbelievable.

6. Tend Not to Shed Too Much

Sheepadoodles are very fluffy-looking animals. As a result, some people might think that they shed a lot. However, that isn’t the case. After all, neither Old English Sheepdogs nor Poodles shed a lot, so it makes sense that their descendants wouldn’t shed a lot either.

7. Don’t Expect Them to Be Hypoallergenic

Speaking of which, interested individuals shouldn’t expect the Sheepadoodle to be hypoallergenic. Simply put, even though Poodles tend to be considered hypoallergenic, Old English Sheepdogs are very much not the same. It is possible for a particular Sheepadoodle to take after the Poodle side of its heritage more than the Old English Sheepdog side of its heritage, but interested individuals shouldn’t count on it. For that matter, the question of whether a particular dog breed is hypoallergenic or not is too complicated to be answered by either “Yes” or “No,” particularly since every dog breed produces the allergens that can trigger dog allergies.

Unsurprisingly, the Sheepadoodle’s fluffy coat requires regular grooming. A daily brushing is the recommended course of action. However, interested individuals might be able to get away with just a few sessions on a weekly basis. Sheepadoodles are very active animals. As a result, well, suffice to say that their coats can get dirty within a very short period of time. This need for regular grooming is one of the demands that interested individuals can expect on their time.

On a semi-related note, Sheepadoodles also apparently need regular ear cleaning. Supposedly, this is caused by the combination of their floppy ears with their fluffy coat. The floppy ears keep their ear canals moist. Meanwhile, their fluffy coat increases the chances for dirt, dust, and other unwanted substances to become trapped in it. Combined, this means that Sheepadoodles have a higher than normal chance of getting ear infections, meaning that regular ear cleanings are needed to minimize the chances of that happening.

Sheepadoodles are very active animals. Thanks to this, they need at least an hour’s worth of exercise on a daily basis. Otherwise, Sheepadoodles can become bored, which is the kind of thing that can lead to a wide range of problematic behaviors. Something that is particularly true because of their considerable size. As such, if interested individuals aren’t very active, they might want to stay away from these dogs. On the plus side, if they want thinking about living a more active lifestyle, getting a Sheepadoodle might provide them with the push that they need.

Both Old English Sheepdogs and Poodles are good-natured. As such, it should come as no surprise to learn that Sheepadoodles tend to be good-natured dogs as well. Simply put, they tend to be loyal, loving, and obedient, which should come as welcome news for people who want a canine companion for their household.

Speaking of which, Sheepadoodles also have a reputation for being on the friendly side of things. They are capable of getting along well with both new dogs and new humans. Having said that, interested individuals should still make sure that their Sheepadoodle is socialized when said dog is still young. A dog’s personality comes from both their nature and their nurture. As such, even though Sheepadoodles are friendly by nature, their owner still needs to make sure that the nurture side of things is covered as well. Otherwise, well, suffice to say that a lack of proper socialization means serious behavioral issues that will be much more complicated and time-consuming to correct than just socializing the dog in the first place.

13. Not Too Prone to Barking

Some dog breeds are very vocal. In contrast, others are very much not. Sheepadoodles tend to be the latter rather than the former. Something that makes them well-suited for living in places where noise pollution is a serious problem in spite of their very active nature.

This is one of the reasons that Sheepadoodles aren’t considered to be natural watch dogs. After all, their lack of barking means that they are less likely to make the presence of strange animals and strange people known to the other members of their household, which is a serious issue for watch dogs. On top of that, Sheepadoodles are a bit too friendly for the role. There are some dog breeds that are either standoffish or even worse when it comes to strangers. However, that is definitely not the case for Sheepadoodles, who tend to be much more open towards those strangers. Still, there are claims that Sheepadoodles can be trained to become watch dogs, though that requires extra effort as well as an extra measure of competence.

The Sheepadoodle is capable of being taught to do a wide range of things. To a considerable extent, this is because these dogs are very intelligent by canine standards. This makes sense because both Old English Sheepdogs and Poodles originated as working animals, meaning that extra intelligence would have been a positive because that would’ve made it easier for them to learn to perform their duties. Nowadays, both Old English Sheepdogs and Poodles see a fair amount of use as canine companions. However, while that intelligence might not be as critical as it once was, it remains a positive for them in their new role. As such, it stands to reason that Sheepadoodles would have inherited their intelligence as well.

Old English Sheepdogs are sheepdogs. As a result, it is possible for a Sheepadoodle to show herding behaviors when it is around small animals. This includes nipping, which can be frightening and otherwise unpleasant for those on the receiving end. Due to this, interested individuals need to train their Sheepadoodle out of such behavior if they see it. Furthermore, they shouldn’t leave their dog unsupervised with either small children or small animals because that creates the potential for something to go wrong while they aren’t available to intervene.

There are plenty of dog breeds that can handle time on their own with no issues whatsoever. Unfortunately, Sheepadoodles are on the more affectionate side of things, so much so that some of them can become rather clingy. The problem with this is that if they spend a lot of time away from their owners, they can start showing separation anxiety. Due to this, if interested individuals need to leave their dog alone for much of the day, they might want to look into other dog breeds. Having said that, there are various methods that have been recommended for dealing with separation anxiety, with examples ranging from setting up a video camera to building up their tolerance over time.

Sheepadoodles can claim English roots because Old English Sheepdogs originated from pretty much exactly where one would expect based on that name. Both England and Scotland came into existence in the medieval period. However, both regions can trace their origins further back. Eventually, the two regions were brought together under a single crown because Queen Elizabeth I of England had no son of her own body, with the result that she was succeeded by her relative King James VI of Scotland. However, that didn’t mean that the two regions just started converging in every single respect, as shown by how they yielded some very different dog breeds. The Old English Sheepdogs is just one example of those dog breeds.

19. Can Claim German or French Roots

On the other side of their heritage, Sheepadoodles can claim German roots because most people believe that Poodles originated from the German version of the water dog. However, there are those who believe that said dog breed came from the Barbet, meaning that they would be able to claim French roots instead.

Mixed-breed dogs have a reputation for being healthier than their purebred dogs because they aren’t as inbred. However, it is important to remember that this is supposed to be true when comparing entire populations with one another. As such, it is very much possible for a particular Sheepadoodle to have serious health issues even if Sheepadoodles on the whole are healthier. Getting a dog from a reputable dog breeder is a good way to reduce the chance of this happening. Even then, interested individuals should be bringing their dog to see a veterinarian on a regular basis. Providing dogs with preventative healthcare might be a hassle. However, it is also the best way to safeguard their health from the various issues that can come up.