Although there are many reasons why people abandon their dogs, one of the most common reasons is that they no longer have the financial means to care for their dogs properly. Sometimes, people have the best intentions when they welcome a dog into their life. They have the means to care for a dog, and they are fully committed to ensuring that all their dog’s needs are met. Sadly, some people’s lives can take a downward turn and soon begin to spiral out of control. This can lead to them making the heartbreaking decision to part ways with their dog. It seems that this was the case for a dog called Cracker who was abandoned in England. I Heart Dogs reported the story of a Staffordshire Bull Terrier mix who was found tied up just a few days before Christmas. He was discovered inside Sacred Heart Church in Blackpool, Lancashire. The dog, which has since been called Cracker, was accompanied by a note written by his former owner.

The heartbreaking note explained that his owner had not taken the decision to leave the dog lightly and that they felt they had no other option. They said that although the dog means the world to them, their life had taken an unexpectedly bad turn. The person had been left without a home or money, and they couldn’t bear the thought of forcing the dog to live on the streets where they would be cold and hungry. At the end of the note, the owner has written how they hope the dog finds the home and the life he deserves. They have signed off by saying they are so sorry for having to leave the dog and finished with some kisses. It was clear from the note that leaving the dog had been a very difficult decision. Rather than abandoning him for neglectful reasons, this was obviously a person who felt they had no other option and that they were making the best decision for the dog. Although it would have been better for the owner to take the dog to a shelter, at least he was warm and safe inside the church.

The RSPCA was informed about the dog being left, and he was collected by RSPCA inspector Will Lamping. He took the dog for a check-up with a local vet straight away. It was found that Cracker was in good health, which is another sign that he had previously been well looked after by her owner. Speaking about this case, Lamping has said that he does not have any ill-feeling towards Cracker’s owner. From his experience working for the RSPCA, he knows that a lot of dogs are abandoned around Christmas time. He also knows that people can fall on hard times that completely change their circumstances and can leave them in a desperate situation. Instead of having ill-feeling towards the person, Lamping has expressed his sympathy. He has said that it is heartbreaking to think that there is someone out there who is now missing Cracker. He hopes that they have read the story so that he can offer them some reassurance that Cracker is happy and doing well. He is also getting lots of tender loving care from those who are now looking after him. 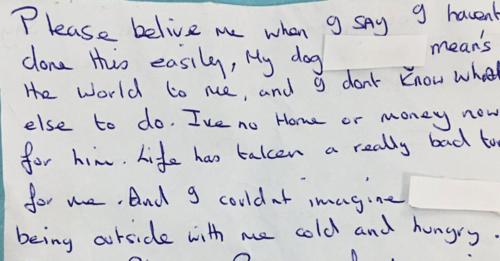 Lamping also hopes that there is the possibility of reuniting Cracker with his owner and finding a way to help his owner care for him. He is trying to track down Cracker’s owner and wants to reassure them that they will not face punishment for abandoning the dog. He is hopeful that they will come forward to claim Cracker, and that they can sit down to have a chat together about a way forward. Many people who are facing financial difficulties resort to abandoning their dogs, but Lamping says that this is not the only option for them. Many people in the UK are unaware that the RSPCA does so much more than run animal shelters and remove pets from homes where they are being abused or neglected. They also offer several ways of helping people who are struggling to care for their pets. Lamping highlighted the various ways that the RSPCA can offer support to those who are having a difficult time. He encourages anyone who id having problems with their finances or housing to contact them for advice and support. The RSPCA inspector went on to reiterate that there was no judgment involved, they simply want to help people and their pets.

Another organization that is involved in Cracker’s case is Street Paws. They are an organization that supports people who are experiencing homelessness to care for their pets. They offer emergency kennel space and free veterinary care to those suffering personal difficulties so that they can keep their pets. Street Paws has confirmed that it has been involved with Cracker before. At that time, the dog was called Rooney. In the last year, Street Paws has helped Cracker’s owner by offering emergency kennel space. Therefore, they are fully aware of his owner’s personal circumstances. They have used their social media pages to let people know that they are working alongside the RSPCA to locate Cracker’s owner so that both organizations can offer support. Street Paws has also reached out to homeless service providers in Blackpool for extra support. Everybody involved in the case just wants the best possible outcome for both Cracker and his former owner. As yet, Cracker’s owner has not come forward, so he remains in the care of the RSPCA. While this is not the best situation for the dog, he is happy, settled, well-fed, and warm. Although his owner’s actions seem drastic, at least Cracker now has what his owner wanted. There is still some hope that the organizations involved in this case will somehow find a way to reunite the pair.

10 Things You Didn’t Know about The Cordoba Fighting Dog