Let’s just start by saying that in the times we live in it’s terribly hard to find a person who will put their own self-interest aside long enough to even assist someone with car trouble. It’s bad enough that we can’t seem to put our phones down long enough to even notice others, but we also seem to ignore the actual trouble that we do see. If we can’t even take the time or effort to help our fellow man, it should be no surprise to anyone that most of us wouldn’t bother with the immediate need of an animal. Though a bit of time has passed, the following true story is timeless in our opinion, and in a perfect world, everyone would respond the way the woman below chose to.

We have all heard stories, on social media or from friends or family, about injured animals, or animals that have been neglected or abandoned. Heartbreaking as they are, it feels great when we learn that these fur babies had someone come to their rescue and give them a second chance at life. This is just what happened for a dog who was given the name Bear while being saved from certain death by a woman named Amanda. At an off-road vehicle park located near Enumclaw, Washington called Evans Creek, a stray dog had been spotted. The dog was skin and bones, and he was in such a state of mistrust that he wouldn’t let anyone come near him. The woman who was destined to save his life, Amanda, was tagged in a post which had been made about the situation, and by nightfall she and her friend Dylan were on their way to Bear’s location to see what they could do to help. Little did they know the job wasn’t going to be so easy. 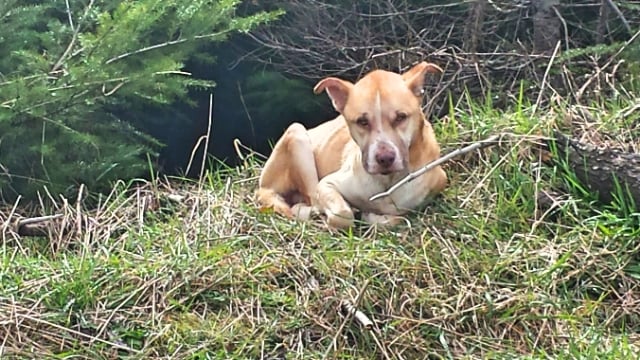 The pair found the stray dog with no problem. He was lying on the ground near the side of the road, and he was more than apprehensive about the two strangers who had come to help. The first thing they did was try to get the dog to come to them by tempting him with food, but even in his weak, scraggly condition the offer wasn’t effective. They finally gave up for the night but returned the next day with more food from town. Surprisingly enough, the dog they had named ‘Bear’ was in the same spot. Unfortunately, the lure of the fresh food didn’t have the desired effect…he still wouldn’t let them anywhere near him, nor would he venture to take even a few steps in their 2/3 direction. Knowing that she had to do something to gain Bear’s trust, Amanda finally took things to the next level.

Getting down on the ground in a fetal position and began crawling, a bit at a time, toward the dog, stopping and laying down again now and then. It seemed that the trip would take forever, and it seemed that she would never gain his trust. When she got close to him, he began to growl at her, so she would simply stop, let out a small whimper and then a yawn, which seemed to pacify the frightened animal. One certainly has to wonder what kind of abuse and neglect Bear endured that caused him to be so apprehensive and mistrustful of humans. Thankfully, Amanda thought of this, and she chose her actions accordingly. After all, this dog’s welfare was the priority.

But Amanda patiently persisted, laying, and crawling for hours. Finally, she was able to get next to the scraggly pooch, and once she made it, it didn’t take long for Bear to draw near to her body and cuddle. Amanda had done the seemingly impossible…she had gained the poor dog’s trust; she was eventually able to pet him, which she did for two more hours. It was then that Bear allowed her to slip a lead on so they could get the stray to help and safety.

Once the lead was secure on Bear, Amanda had to physically pick up the dog and carry him back to their vehicle. From there she was able to drive him directly to the veterinarian, where she once again cuddled and snuggled with him to put him at ease and reassure him. Because of her gentleness and patience, the vet was able to provide the frightened baby with the medical attention he so desperately needed. I’m sure you’ll agree, the world definitely needs more people like Amanda. Because of her, the focus could now shift to trying to find Bear’s family and reunite them.

But that, however, was not meant to be. For thirty days the word was spread about Bear and his rescue in an attempt to locate the people who may have lost him. Unfortunately, those thirty days passed without anyone coming forward to claim him. Since there was no response to the efforts, it was time for a ‘forever’ family to be found for the dog, who was getting healthier and stronger with each passing day.

You’ll be pleased to hear that it didn’t take very long to match Bear up with a family at all. Soon he was placed with them, and the next thing anyone knew he had settled in as if he had been with them forever. Bear managed to win the love of the people he now belonged to, not to mention their hearts. It’s truly hard to believe that the dog you see today is the same one Amanda spent so much time trying to win over out near the road months before. He is happy, healthy, and loved.

Bear is just one example of the effect love can have on an animal. Unfortunately, not every pet gets a second chance at life, as he did. It is important to love and care for our animals if we are going to have them in our lives, and to recognize the responsibility we have taken on we have a pet. Be an active pet parent if you have one, and if you are willing to go the distance, become a pet parent as soon as possible.

Youtube Star MrBeast Finds Homes for Every Dog in the Shelter

Which Dogs are the Most Popular College Mascots?

10 Things You Didn’t know About the Terripoo

20 Things You Didn’t Know About the Shollie

Are Huskies Good with Kids?

How to Tell if a Dog is Mentally Challenged

Is There Such a Thing as Prilosec For Dogs?