Hercules is the name of a starving dog who was saved from a most unpleasant end by a young Argentinian woman named Pia. In short, Pia found the dog a short time before Christmas of 2017 when she was visiting some friends who were living in Buenos Aires. It was clear to them that the dog was in bad shape. However, while Pia’s friends gave up after failing to catch him, Pia persevered until she managed to find him lying down on the ground situated next to house. Something that prompted her to bring the dog to the veterinarian right away.

Due to Pia’s actions, the veterinarian managed to provide the dog with much-needed medical treatment, though even then, it was touch and go for a while. Apparently, the dog was so sick that he wasn’t able to eat anything for the first while, with the result that he lost two pounds that he really couldn’t afford to lose. Luckily, Pia was there to handfeed him water from a bowl on a regular basis to make sure that he was hydrated, thus enabling him to survive that critical initial period.

Even once the dog had survived that critical initial period, his fight to live wasn’t over, which is what convinced Pia to name him Hercules for the greatest hero of Greek mythology. Initially, Pia brought Hercules to foster care, but she continued to spend a huge amount of time with him, with the result that she helped him relearn how to walk while otherwise being there for him. Unsurprisingly, this resulted in a powerful bond between the two, so much so that by the time that Hercules had managed to make a full recovery, Pia had chosen to bring him home with her, thus making him a Christmas present of sorts. 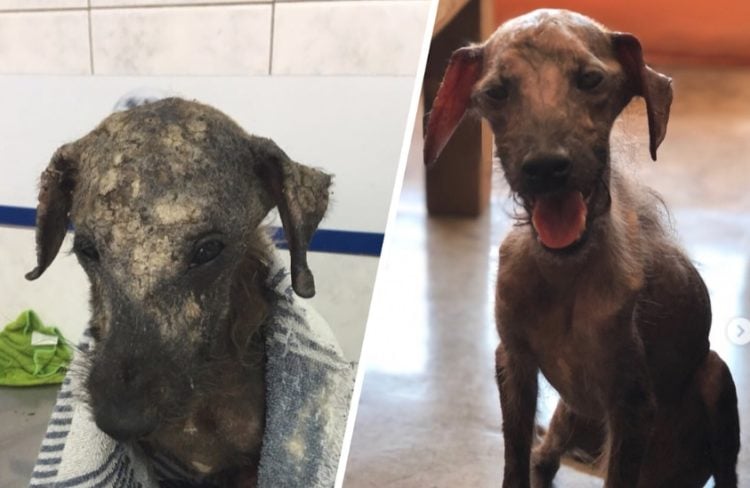 Why Is Going On with Street Dogs in the World?

On the whole, the story is a touching reminder of the plight that is faced by street dogs on a constant basis. In short, street dog is a term that refers to free-ranging dogs in urban landscapes, which is rather broad in nature. As a result, some street dogs are just pets that are permitted a huge degree of freedom from their dog owners. In contrast, other street dogs have either been abandoned or have never been owned in the first place. Street dogs can be found just about everywhere that cities exist, though there are exceptions to this rule in places where the local residents have made a serious effort to eliminate their presence in one way or another.

Dogs are pretty remarkable animals. As a result, it should come as no surprise to learn that street dogs have learned a lot of adaptations for their way of life. In particular, it is worthwhile to mention that there are street dogs in Moscow that have been observed making use of the subways to get around, which is a degree of intelligence that most people wouldn’t have expected. Unfortunately, the street dogs that we see are the street dogs that have managed to make it, whereas a huge percentage of street dogs meet with much more unfortunate fates, which can be particularly true when they are abandoned dogs rather than dogs that never had owners. Exact statistics on the matter are unclear, but there are estimates that something like 80 percent of street dogs will die an early death in some places because of a lack of survival skills. Suffice to say that this is horrendous, particularly since those early deaths are likely to be long and painful in nature.

Unfortunately, there is no simple and straightforward solution to this particular problem. Simply put, there are too many street dogs out there with not enough resources being available for their food, medicine, and other necessities. However, Pia’s example is a good reminder of just how much the right measure of compassion can help at the right time. Yes, Pia’s actions did nothing to address the issue of street dogs as a whole. However, her actions were nonetheless enough to save the life of Hercules, which is definitely something that mattered to Hercules. After all, a dog saved is still a dog saved, which is very much an upset for those who are concerned about canine welfare.