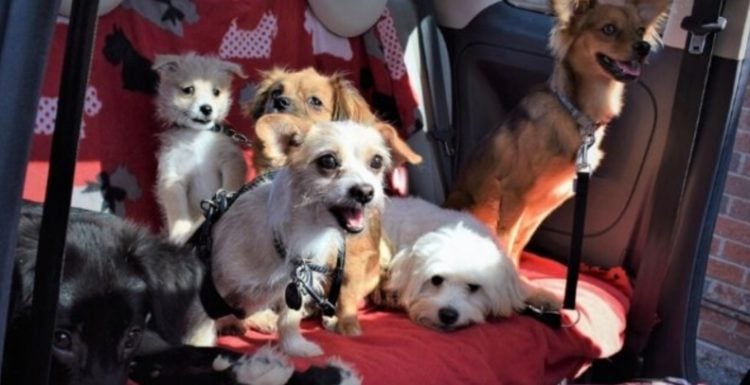 It is often the case that when a dog with a disability enters a shelter, that they spend a prolonged period there. This is because people are often reluctant to adopt a dog with special needs as they will need more care and there are often medical costs to consider. In some cases, this leads to the shelter euthanizing the dog as they do not have the financial means to offer long-term care. That was the situation for one pup living in a shelter 12-years-ago until a kind-hearted woman decided to offer the pup a home. I Heart Dogs describes how Claire-Louise Nixon prevented the dog from being euthanized by offering it a forever home. Nixon, who lives in Milton Keynes in England, knew that offering a dog with a disability a home was a big commitment. However, she did not know that offering one little dog some love and dedication would lead to her life changing completely.

The first dog Nixon adopted was called Thomas Cook. He was a tiny Cocker Spaniel that had a cleft palate. PetMD describes this condition as the failure of the two sides of the palate of the mouth to fuse together properly during embryonic development. This condition meant that he had problems eating properly and needed assistance from his new owner. Nixon loved the experience of caring for the little dog, and it ignited a passion in her for caring for animals. Caring for Thomas Cook inspired Nixon to help other handicapped dogs, and she decided to make it her mission to rescue as many special needs dogs as possible. She believed that she could offer them the love and dedication they needed to enjoy a happy and fulfilled life.

12 years later, her brood now consists of 27 dogs, all of which have special needs. Her brood grew after the word spread around Milton Keynes about Nixon’s dedication to caring for dogs with a disability. Her home has now become a handicapped-pup sanctuary. However, not all of her rescue dogs have come from local shelters, as she has opened her home to disabled rescue dogs from all around the world who have either suffered injuries or that have been born with a disability. Looking after 27 dogs, each of which has individual needs is not an easy task. It means that Nixon must put hard work and commitment into caring for her brood every day. Just some of her daily tasks include bathing dogs with paralysis to keep them clean and infection-free, giving the appropriate medications to the different dogs and hand-feeding dogs that struggle with eating. Housework is also a big task as she must clean her house from top to bottom daily because it is home to so many dogs.

It is an around-the-clock job caring for the dogs and cleaning the house, and this can sometimes become tedious for Nixon. However, she says that it is worth it to make such a difference to the lives of her rescue dogs. Some of her dogs include a previously paralyzed dog called Freddie Mercury who has relearned to walk, a pup called Sherlock Holmes who was shot by a security guard, and Patrick Swayze, a dog suffering from a condition that causes him to twitch. Some of her other dogs include those who were injured while living in war-torn countries, dogs injured in road traffic accidents, dogs with spinal injuries, and pups born with congenital disorders. Nixon does not discriminate when choosing which dogs to adopt, and she is willing to consider dogs with any injuries or conditions. All she wants to do is to help dogs in need and to stop them from being euthanized because of their special needs.

Many of the dogs that she has invited into her home will continue to need care for the rest of their lives. Nixon is particularly interested in helping dogs that have been paralyzed to regain enough strength to gain back some of their abilities. In some cases, she has even helped dogs to learn to walk again. She never gives up hope, and she is willing to put in the time and effort to help the dogs achieve what may have seemed impossible. This takes a lot of dedication on her part to spend time with each of the dogs completing rehabilitation exercises and encouraging them to improve their skills. This is often against the predictions of the experts, as vets have often said to her that it will be impossible for the dogs to regain any of their former abilities. She ignores their advice and tries to help them anyway, often with unexpected results. She believes that dogs can regain their abilities if you give them enough reason to do so.

Taking care of so many dogs with special needs is a huge task but thankfully, Nixon has a lot of support. She is married to a man who is also an animal lover, and he helps her out with the dogs as much as possible. She also receives a lot of help from members of the public. Nixon set up an organization called Wheels to Paws UK. This organization raises money to support the ongoing care of the dogs that Nixon has adopted. The donations made to the organization by members of the public have made a significant difference in the level of care that Nixon can offer the dogs in her home. The money raised pays for many aspects of their care, including feeding the 27 dogs and covering their medical expenses. Nixon has expressed her gratitude for the ongoing support she receives, both in terms of donations and practical support. It means a lot to her that so many people are supporting her work with dogs with special needs. It is essential that she continues to receive this support, or she will no longer have the means to continue supporting the dogs in her care.