Although the staff and volunteers of animal shelters do their best to make the lives of the animals in their care as comfortable as possible, living in a shelter is no match for having a comfortable home with loving owners. Therefore, the staff at shelters are always looking for ways to raise awareness of the needs of the animals and to try and find them forever homes. In recent years, social media has become an important tool in promoting the stories of animals living in shelters. Using social media certainly improved the life of a senior Chihuahua called Scooter.

According to I Heart Dogs, Scooter once lived in a comfortable home with his loving owner. Unfortunately, his owner passed away and the little Chihuahua was forced to leave his comfortable surroundings.  Following his owner’s death, he was taken in by Michigan’s Humane Society of Branch County. The manager of the shelter, Jan Nageldinger, had some concerns about Scooter’s future. Not only was he a senior dog, but he also had a bad hip. These two issues meant that it was potentially difficult to find Scooter a forever home.

Many people who are willing to offer a forever home to a rescue dog want to adopt a puppy or a young dog as they can keep them for longer and there are fewer issues with training. Similarly, people are often reluctant to adopt any dog that has medical issues as they often need greater care and there is the potential for bigger vet’s bills. For these reasons, Nageldinger expected that Scooter would probably live at the shelter for the remainder of his life. 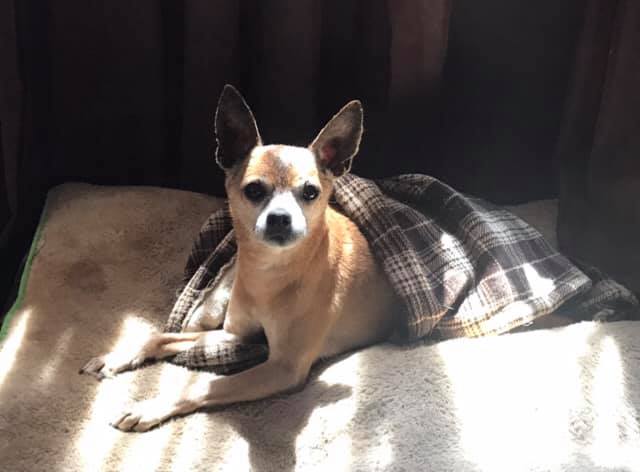 When she was closing up the shelter for the night one evening, Nageldinger decided to take a quick photograph of the dog. He was snuggled up in his blanket looking adorable. She shared the photo to Facebook with a caption introducing Scooter to the world and saying that she hoped someone would adopt him soon. She also told followers that the Chihuahua tucked himself into the blanket every night.  Nageldinger was hopeful that people would fall in love with Scooter and that someone would want to adopt him, but she didn’t expect what happened next. Animal lovers quickly responded by liking the post, writing comments, and sharing it to their own followers. Within days, the post was shared over 3,500 times.

As the post went viral, it is hardly surprising that it eventually reached animal lovers who were keen to adopt a rescue dog. One such person was Jessica Lynn Howard, who had been a supporter of Branch County Humane Society for many years. She had already adopted two rescue Chihuahuas that had lived at the same shelter as Scooter. According to The Dodo, Howard fell in love with Scooter the moment she laid eyes on the post featuring his photograph. She was sat in bed with her husband Tim when she saw the post on Facebook. Howard said that the post made her cry and she showed the post to Tim straight away.

The couple agreed that they needed to adopt Scooter, and they headed for the shelter as soon as they got up the following morning. They then took their new pooch home to introduce him to the rest of the family. Along with Jessica, Tim, and their two children, there were already five dogs living in the house. Three of these are Chihuahuas just like Scooter, two of which lived at the same shelter before the Howards adopted them.

Fortunately, the family has a home that offers plenty of space for so many dogs. They live in a spacious fam, which is the dream environment for any dog. Scooter has lots of energetic bursts when he runs around the large house and the land surrounding the property.  Tim and Lynn have given Scooter plenty of comfortable blankets to cuddle up in, so he feels cozy and settled. In between his energetic bursts, Scooter loves nothing more than taking a nap on his blankets. He has even continued his nightly routine of tucking himself into bed. Jessica has tried to tuck him in at night, but Scooter is accustomed to his own ritual and prefers to follow his own routine by tucking himself into his blankets each night.

Scooter’s life has changed significantly in recent years. He has gone from living with an elderly owner to living in the shelter, and then to living with a loving family with five other dogs. Overall, the little Chihuahua has had a very happy ending to his story. However, Scooter is not the only dog that has benefited from his photograph going viral on Facebook. In fact, the awareness raised by his story has encouraged many other people to help improve the lives of shelter dogs.

Nageldinger has spoken about the wider impact of sharing Scooter’s story online. She explained how the fact that the post went viral meant that it was seen by people globally. Just some of the countries that the post reached included Canada, Puerto Rico, and even Italy.  Following Scooter’s adoption, many people told Nadeldinger that Scooter’s story had inspired them to adopt a dog from a shelter. It had also encouraged people to consider adopting an older dog. Therefore, Scooter’s story had a massive impact on the lives of other dogs and has hopefully given many older dogs a second chance at being part of a loving family home. Therefore, Nageldinger believes that Scooter has helped dogs right across the United States.

This story shows how the use of social media can potentially have a huge, positive impact on the lives of animals living in a shelter. By raising awareness of the individual stories of dogs living in animal shelters, it raises a wider awareness of the need for adoptive families who are willing to offer forever homes for an animal in need. In turn, this will lead to many more dogs getting the happy ever after they deserve, just like Scooter.