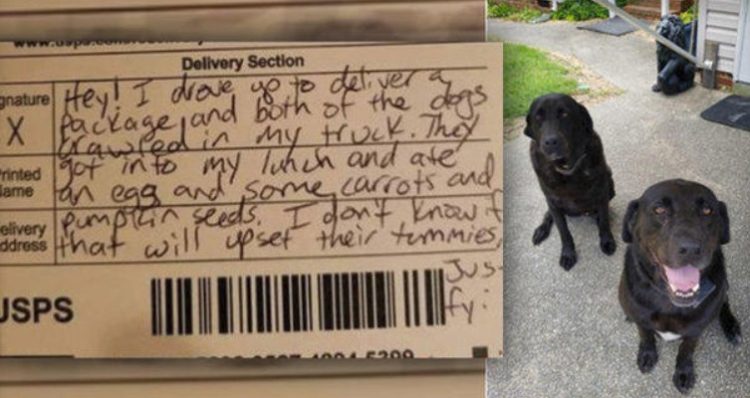 That’s exactly what happened recently in a five-acre farm in Isle of Wright, Virginia. Farm owner Carol Jordan was simply checking her mail as she normally would when she came upon a handwritten note from their usual mail carrier. The words “dogs” and “ate” immediately stood out from the note, and before she could even begin to read it, Jordan already started wondering what her dogs must’ve done this time.

It seems that their dogs, Bear and Bull, have found themselves in a bit of a predicament. Bear and Bull are 6-year old black Labrador/Mastiff mix dogs that Jordan and her husband rescued when they were puppies. Bull has a distinctive white mark on his chest that sets him apart from his all-black brother Bear. Bull and Bear came from the same litter, but their personalities are quite different. Bull is the one that usually gets the two into trouble. 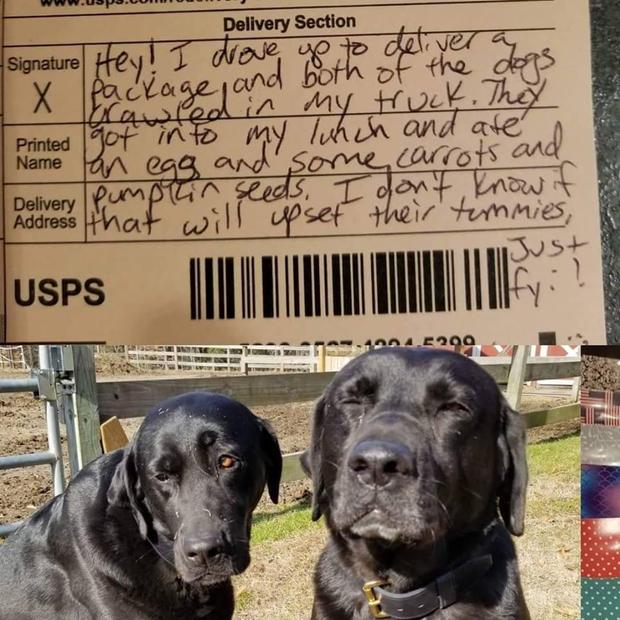 However it may have seemed that the dogs were in trouble then, it turned out that they weren’t. The letter that was left was actually a friendly one—one that even had a hint of concern on it. The letter read, “Hey! I drove up to deliver a package and both of the dogs crawled in my truck. They got into my lunch and ate an egg and some carrots and pumpkin seeds. I don’t know if that will upset their tummies, just FYI!”

After reading the note, Jordan realized that the mail carrier was not angry at all. Jordan was grateful for that but even more for the fact that the mail carrier let her know what her dogs had ingested. Otherwise, they wouldn’t have known. There were traces of leftover carrots on the grass next to the driveway, but no one would’ve known where that came from had it not been for the mail carrier telling them what happened that day.

Just because the mail carrier wasn’t upset didn’t mean that the dogs didn’t misbehave. As punishment, Jordan decided to “shame” the dogs online by posting a picture of the dogs in all their guilt, along with a photo of the note that was left for her to read. Jordan posted this photo composite on Facebook, captioning and tagging it with “Wall of shame #weoweyoulunch,” and before she knew it, Jordan’s post had gone completely viral.

Jordan heard from people all over the globe. There were folks all the way from Australia and New Zealand thanking Jordan for a good, hearty laugh for the day. There were folks from Denmark that commented just how similar their dogs were to each other. Many people tagged other people who would probably be all too familiar with the scenario.

As a way to make up for the lost lunch, Jordan bought a $20 gift card from Subway, which she left for the mail carrier along with an apologetic note from Bear and Bull. The note read, “Sorry we ate your lunch. Thank you for sharing…P.S. Our humans said thank you for leaving a note. We didn’t like the note, we got in trouble.”

Jordan posted this apology on Facebook again as an awesome way to close that story. But while that may be closed now, a new chapter has begun in the lives of the Jordan family. Because of the responses from people all over the world, Jordan decided to start up a Facebook page dedicated to the dogs and all their misadventures and mischiefs. Bear and Bull have become instant celebrities, but they’re not even aware of it. They just carry on with their day-to-day activities, getting into things they’re probably not supposed to. The best part about it all is that they’re just doing their normal activities without knowing that they’re probably making someone from the other end of the world laugh out loud or even give a little smile. If there’s something that man’s best friend is good at, it’s making us all smile.