Most children love animals, and dogs are often their favorites as this is an animal that lots of children have in their families. As children love dogs, it makes sense to use them as a subject for learning. It also makes sense to use the children’s learning to also raise funds for dogs in need. According to I Heart Dogs, this is exactly what is happening at Harrisburg Horizon Elementary in South Dakota. The students in the kindergarten class at this school are doing as they are making their own dog treats to sell in a fundraiser to support a local animal shelter. The treats that the kids are making are being sold to raise money for the Almost Home Canine Rescue. The children who are involved in the project have all been made aware of just how important it is for shelters like this to receive donations so that their good work can continue.

So far, the kids have been having a blast with the project, and it has even brought out the competitive side in some of the students. This is especially the case for five-year-old Julia Page and her twin brother. In an interview with a reporter covering the story, Julia said that the treats she had made were better than her brother’s. She attributed her brother’s failure to reach her standards to him using too much flour. She even said that his treats had looked like poop when they first began making them. Julia also told the reporter about her own love of dogs. At home, she and her brother have a Boxer dog. Julia says that she loves the dog so much that she even lets him kiss her face, and that he gives the best nose kisses ever. It is possible that her Boxer dog may become one of the lucky recipients of a bag of the doggy treats the class has made.

The kids are making these treats with ingredients that are safe for them to use. They are also safe and delicious for dogs. To ensure quality control, the teachers are always on hand to supervise the production process and to make sure the children are producing the tastiest dog treats possible. This project is not just about raising money for the shelter, as it is also important that the children have plenty of learning opportunities throughout the project. Their teacher, Sarah Hansen, has explained that there are many ways that the children can learn from their involvement in this activity. She specifically outlines play-based learning, learning numbers, reading, learning things in context, and project-based learning as some ways that children can learn through their involvement with projects like this. 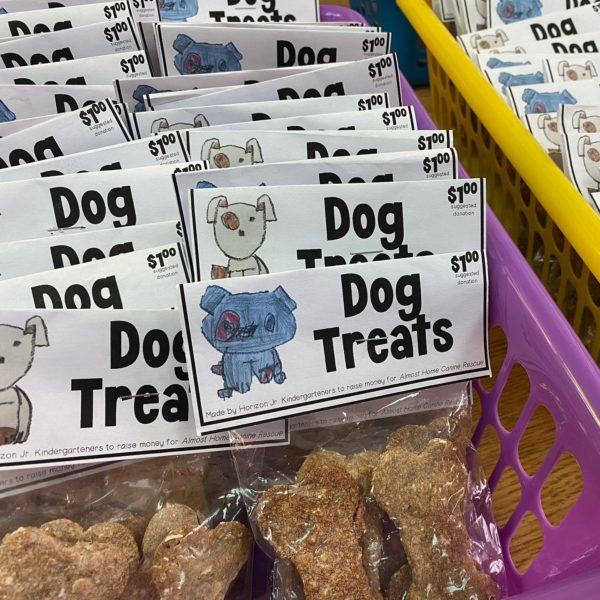 This project has also been a fantastic way for the children to learn more about how they can help dogs in need and about the work that goes on behind the scenes at rescue shelters. This has made them even more enthusiastic about what they are doing. Garrett Laetsch, a five-year-old in the kindergarten class, described the need to support shelters as an emergency, and he said they needed to do anything they could to support them right away. Garrett also described the fun that he was having making the treats. He said that he and his classmates were having a great time working on the project and that his favorite part of the process was rolling out the treats. Although he has clearly had a good time, Garrett clearly understood that the purpose of the project was a very serious one, as he explained that without making money, the dogs will not get rescued by the shelters.

Of course, it is the profit potential of the children’s endeavors that is one of the most important points. Dog owners can buy their canine friends a bag of the homemade dog treats for the budget-friendly sum of just $1. All the proceeds from the dog treats are being donated to the animal shelter to help them to continue to rescue and care for dogs until they can find them a forever home. The shelter is extremely grateful for the efforts being made by the kindergarten class, and any extra funds are always welcomed. It is only because of people undertaking fundraising projects and kind animal lovers making a generous donation that they can continue their work. It is not only the children of this elementary school that has undertaken projects to support a local shelter, as there are examples of children from across the globe who have also undertaken fundraising projects to support animal charities.

One such example is the case of a nine-year-old Russian boy who began painting animal portraits and selling them to support animals in need at a local shelter. Metro reported the story of Pavel Abramov from Arzamas in Russia who is a talented artist that turned his talents into a money-making scheme for animals. The young artist paints animal portraits for the animal’s owner, based on a photograph that they send to him. In exchange for painting these portraits, people give him money to donate to his local shelter. Alternatively, he is willing to accept practical donations for his work, such as dog food, dog beds, blankets, and anything else that is needed by the animals at the shelter. In some cases, Pavel does not meet the animals he paints. However, he has been lucky enough to meet with some of his subjects and their owners.

Pavel’s work has been highly praised, not only for his artistic skills but also for his kindness in doing the portraits for no financial gain of his own. His story went viral on social media, and he has also featured in multiple printed publications across the globe. Children like Pavel and the kids from Harrisburg Horizon Elementary give hope to future animals in need. If they have such a supportive attitude towards animals at such a young age, then they can carry their work forward and encourage future generations to do the same.