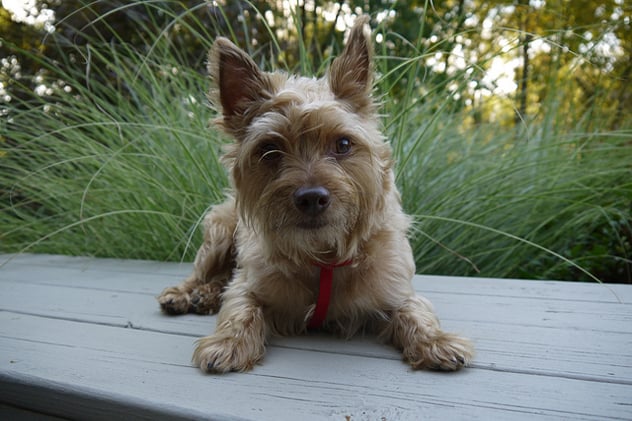 Yorkie Poos are a hybrid dog that are a combination of the result of combining a Yorkshire Terrier and the miniature Poodle. The two separate breeds are small breeds, which creates a small dog that is perfect for those who need, or desire a small breed of dog. The breed is referred to by several different names, including the Yorkiepoo, the Yorkiedoodle, or the Yo-Yopoo. Depending on the strength of the offspring’s parental characteristics, the Yorkiepoo can develop any number of combinations of the parent’s traits. The offspring can wind up having any of the traits of either of the parent and end up looking more like a miniature Poodle, more like a Yorkie, or being a good mix of both. However they look, the breed is generally a happy, energetic and loving dog that loves and is devoted to its family. They love, and thrive on being a part of the family and should not be separated from them. They are highly content to be in your lap while you are lounging on the couch watching TV, visiting, or reading a book, so if a good lap dog is what you want, this is one breed to consider. Even so, they do love to play and will need some good walks during the day, and plenty of play time. They are a beautiful breed, and are a fun dog to watch in videos, so here are five of the cutest Yorkie Poo videos of 2017 for you to enjoy.

5. Learning to play with a ball

Ok, this is so cute because this Yorkie Poo is only half the size of the soccer ball in which he is learning to play with. His owner is trying to teach him how to play with a ball, but the problem is, the ball that is trying to push and play with, is twice his size. That is one of the things that makes this video so cute. This Yorkie Poo keeps running up to the ball and giving it a nudge with his nose. He’s slowly getting it, and watching him learn to interact with it is adorable. You can hear the owner tell him, “Play ball,” over and over again, and by the end of the video, you can see that he has finally got it.  Too cute, and you will have to agree after you watch the video.

Next to a Mastiff, the Yorkie Poo likes like a little rat. Especially Yorkie Poo pups this age. The two pups are so small and yet they have zero fear of the Mastiff. They are as curious of him as he is of the two, tiny little things that smell like a dog, yet probably do not look like a dog. The two pups clamber around the Mastiff as he just lies patiently on the porch, letting them sniff him, and even get nose-to-nose with him, which is so cute. At one point, one of the pups gets around back near the Mastiff’s tail and it only takes one whisk of the tail, and you can see the damage it would cause if it really whacked him. Watch the video to see how two opposite sized dogs react to each other. It’s one of the cutest videos.

In this video, these three tiny little Yorkie Poos are learning to play, and play, they do. It is one of the cutest sites, and videos, watching these adorable puppies rough and tumble together, rolling over each other, play tug of war, and just have a good time together. You’ll notice in the video that one of the puppies has a splint on its leg and yet it doesn’t detour it from having fun. Too bad us humans can’t all have this type of spirit in life. Watch this video and see if you don’t agree that it is one of the cutest Yorkie Poo videos.

2. Yorkie Poo with an attitude

He may be small, but watch out! This little guy has an attitude and he means business. The Yorkie Poo is comfortably lying on the bed, playing with, and licking a ball and he doesn’t want to be messed with. His owner is taunting him, putting a stuffed animal next to him, even moving in on his ball, and this pup isn’t going to have any of it. He doesn’t find the humor in it and you can tell, just watch him snarl and attack the camera. It’s a cute video that shows how even Yorkie Poos can get angry – and it’s awfully cute! Watch.